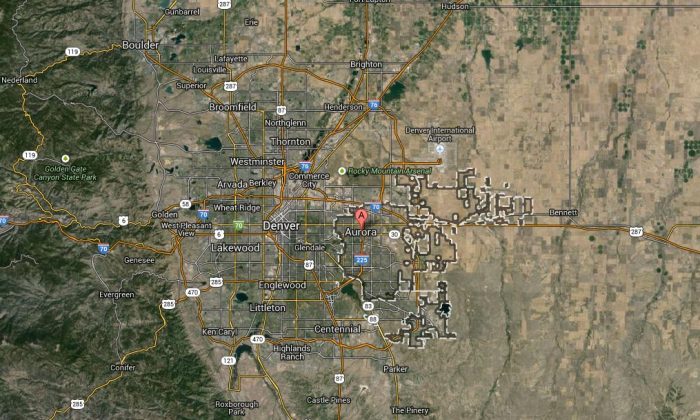 A shooting in Aurora, Colo., has reportedly prompted the lockdown of several schools, according to reports on Tuesday afternoon. (GoogleMaps)
US

A shooting in Aurora, Colo., has reportedly prompted the lockdown of several schools, according to reports on Tuesday afternoon.

Police told CBS Denver that the schools were locked down following a “shooting incident.”

The Denver Channel has more: “Police reported a man with a gunshot wound at 51 Newark Street.  Police are reported shots fire in the 1900 block of Beeler Street. They are trying to determine if the two calls are related.  The two locations are about 4 miles apart.”

CENTENNIAL, Colo. (AP) — Jury selection has moved more quickly than expected in the Colorado theater shooting case and the trial could begin as soon as April, a judge said Thursday.

During direct questioning of potential jurors, Judge Carlos Samour said the pool of candidates for further screening was growing more quickly than he had anticipated.

After six days of direct questioning, the judge said he had 27 potential jurors for group questioning. Samour has said he wants at least 100 people for that part of the process.

Samour asked one potential juror Thursday if a trial that starts in late April or early May would pose a hardship. He replied it would not.

James Holmes has pleaded not guilty by reason of insanity in the 2012, attack at a Denver-area theater that killed 12 people and wounded 70 others.

His lawyers acknowledge he was the gunman but say he was in the grip of a psychotic episode.

Samour noted Thursday that one jury candidate had made references on a questionnaire about the length of time the case has already taken.

“Given the magnitude of this case it hasn’t taken that long,” the judge said. “We take our time in these cases given what’s at stake.”

The prospective juror was among three people released after saying they could not impose the death penalty because of religious beliefs.