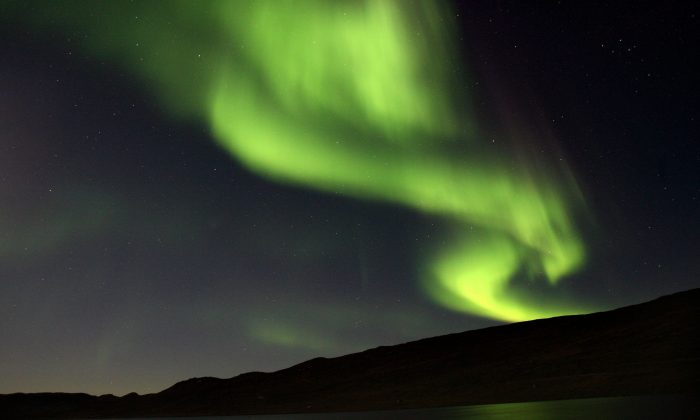 A solar flare is hitting the Earth this week and that means the Aurora Borealis, also known as the Northern Lights, may appear in London, Washington, Oregon, New Jersey, and New York. (Uriel Sinai/Getty Images)
US

A solar flare is hitting the Earth Tuesday and that means the Aurora Borealis, also known as the Northern Lights, might appear.

UPDATE on Wednesday: According to NOAA forecasters, the Aurora Borealis could return on Wednesday night in northern UK and European areas as well as Alaska and northern Canada.

UPDATE on Thursday: There’s a possibility for the Northern Lights to appear tonight.

The Northern Lights didn’t appear in London, Oregon, Washington state, but there were reports of it showing in the northern U.K., Sweden, Norway, Finland, and even in Wales, according to photos posted on Twitter.

On Twitter, users said it showed as far down as Colorado and the mid-US. It also appeared in northern Canada and Alaska.

The solar storm, described by U.S. forecasters as severe, started hitting the Earth on Tuesday, and it could potentially impact GPS tracking and power grids. It also means that the Northern Lights may be seen farther south of where they’re normally seen.

@spann Auroras in my home a couple of hours ago. Still ongoing in some shape or form. pic.twitter.com/l7S5uLNL6D

The Space Weather Prediction Center in Boulder, Colorado, said no damage has been reported thus far. On Sunday, the sun erupted massive amounts of magnetic plasma, and it hit the Earth 15 hours earlier and stronger than was expected.

A number of people in Ireland, Wales, Sweden, Scotland, Norway, and Finland said they could see the Northern Lights.

On its website, the Space Weather Prediction Center said: “A G4 (Severe) geomagnetic storm was observed today at 07/1358 UTC (09:58 am EDT). This is the response to a pair of CMEs observed leaving the Sun on 15 March. Shown here is a model depiction of where the aurora is likely visible. Storm conditions are forecast to persist for the next several hours before beginning to wane down towards the end of the UT day.”

The Aurora Borealis, also known as the Northern Lights, is a natural light display caused by charged particles that collide in the Earth’s atmosphere. It can be seen above the northern and southern hemisphere’s magnetic poles.

In the meantime, one can analyze the planetary-K index. “The K-index, and by extension the Planetary K-index, are used to characterize the magnitude of geomagnetic storms. Kp is an excellent indicator of disturbances in the Earth’s magnetic field and is used by SWPC to decide whether geomagnetic alerts and warnings need to be issued for users who are affected by these disturbances,” it says. “The principal users affected by geomagnetic storms are the electrical power grid, spacecraft operations, users of radio signals that reflect off of or pass through the ionosphere, and observers of the aurora.”

Some forecasters said that the Northern Lights might be seen as far south as the Dakotas, New York (just above NYC), Minnesota, Wisconsin, New Jersey, Oregon, and Washington state.
According to The Associated Press, the director of the Space Weather Prediction Center said, “It’s significantly stronger than expected.” Also according to AP, “The storm seemed to be weakening slightly, but that may not continue, and it could last all day, officials said. It has the potential to disrupt power grids but only temporarily. It also could cause degradation of the global positioning system, so tracking maps and locators may not be as precise as normal.”

Space Weather branch chief Brent Gordon told AP that if the storm was in effect until Tuesday evening, there could be a “very strong possibility” the Aurora Borealis could be seen in Tennessee, Oklahoma, and even the UK.