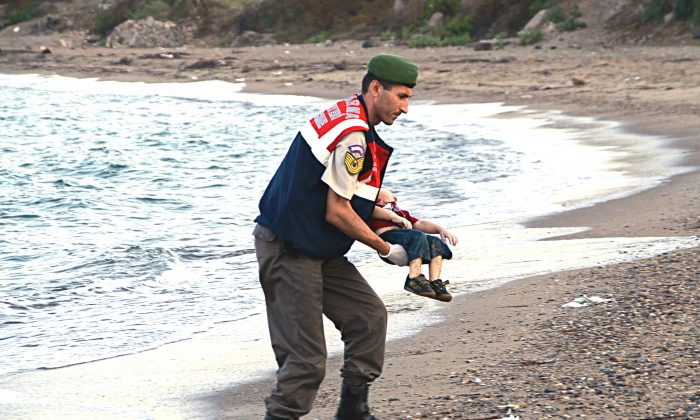 A paramilitary police officer carries the lifeless body of an unidentified migrant child, lifting it from the sea shore, near the Turkish resort of Bodrum, Turkey, early Wednesday, Sept. 2, 2015. (AP Photo/DHA)
Europe

Aunt Had Tried to Sponsor Family Who Drowned Off Turkey

ANKARA, Turkey—Canada rejected a request to take in the Syrian family whose mother and two young sons drowned this week trying to get to Europe, a Canadian lawmaker said — a request that involved the 3-year-old boy who washed up on a beach in Turkey, galvanizing a worldwide debate about migration.

Rehan Kurdi and her sons Aylan and Galip, who fled the Syrian town of Kobani, were among 12 migrants who drowned when two boats carrying them from the Turkish coast to the Greek island of Kos capsized. Images of Aylan’s body washing up on the shore Wednesday and being taken away by a Turkish officer sparked witnesses to tears and prompted a widespread discussion about migration Thursday in the news and on social media.

Canadian legislator Fin Donnelly told The Canadian Press that he had submitted a request on behalf on the boys’ aunt, Teema Kurdi, who had wanted to bring the family to Canada, but her request was turned down by Canadian immigration officials. Teema Kurdi, based in the Vancouver area, is the sister of the drowned boys’ father Abdullah, who survived.

According to Turkish news media, the family had fled Kobani, a city in northern Syria that was leveled in battles between ISIS extremists and Kurdish fighters.

The tides also washed up the body of Aylan’s brother Galip on Hoca Burnu beach on Turkey’s Bodrum peninsula.

The heartbreaking images of Aylan, splashed across newspaper front pages, have increased the pressure on European leaders to take action to ease the suffering of those involved in a wave of migration not seen since World War II.