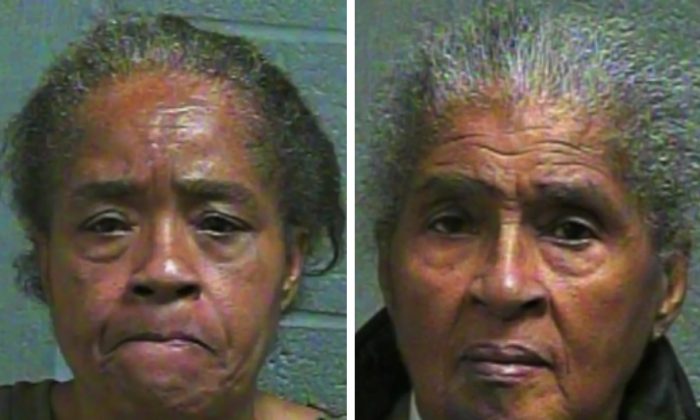 Police officials have announced the arrest of two Oklahoma women on child neglect charges in connection with an incident last December in which a 6-year-old girl died from asthma complications.

The two Del City women were reported by KFOR as being the deceased girl’s aunt and great-grandmother.

The child—identified in court documents only by her initials A.C.—was being looked after by the two women when she died.

“If her caregivers would have intervened and provided medical attention, then we very well wouldn’t be here right now,” said Del City Police Capt. Bradley Rule, according to KFOR. “[Holloman and Hudspeth] were both, actually, former CNAs—former certified nursing assistants.”

The little girl died on Dec. 9 after being rushed to the hospital by paramedics who responded to a call that she was unresponsive at home on the floor.

Arrest records cited by KFOR show that several days before her death, the girl was sent to the nurse’s office at Del City Elementary School because she was having trouble breathing.

School officials unsuccessfully tried to contact Hudspeth—the child’s primary listed guardian—before reaching Holloman and asking her to pick up the little girl because her condition was bad enough that she needed to go home and be seen by a doctor that day.

Holloman reportedly refused to pick up the child and also declined the school’s offer to call an ambulance. School staff finally took the girl home.

The girl’s siblings later told investigators that when they arrived home from school on that day, A.C. was sick in bed and complained of a headache. The children reportedly also said that at one point Holloman had the girl on her lap, before placing her on the floor. They said at one point Holloman left the room and when she came back, A.C. had urinated on herself and was not breathing.

Paramedics were called to the house, found the girl unresponsive and immediately tried to resuscitate her.

The 6-year-old was then rushed to the hospital and two days later pronounced dead.

An autopsy listed the cause of death as complications from asthma.

The girl’s three siblings were asked about an injury and said A.C. broke her arm several months ago doing back-flips. They said she was “crying for three days because of the pain,” but that Holloman and Hudspeth dismissed the injury as benign and did not seek medical attention for the child.

Investigators found no DHS medical records showing the girl sustained a broken arm, nor that she suffered from asthma. School medical records showed Hudspeth indicated A.C. did suffer from chronic lung disease, had been seen by the nurse in the past and checked out of school by Hudspeth.

“During the investigation it was learned that the grandmother and the aunt stated that they didn’t seek medical attention because they didn’t have the money, nor did they have insurance to have the child treated,” Rule said. “It was a tragedy that shouldn’t have happened.”

Neighbors interviewed by KFOR called the girl’s death a tragedy.

School officials expressed regret at the girl’s death and said they would review their procedures for dealing with students who fall ill.

“We are deeply saddened by the loss of our student,” Mid-Del Community Relations Director Stacey Boyer told KFOR in a statement. “As situations warrant, we take time to look at our practices to determine if changes need to be made.”

Police said the girl’s siblings have been removed from the custody of the two women.

Holloman and Hudspeth were booked into the Oklahoma County jail, with charges pending.