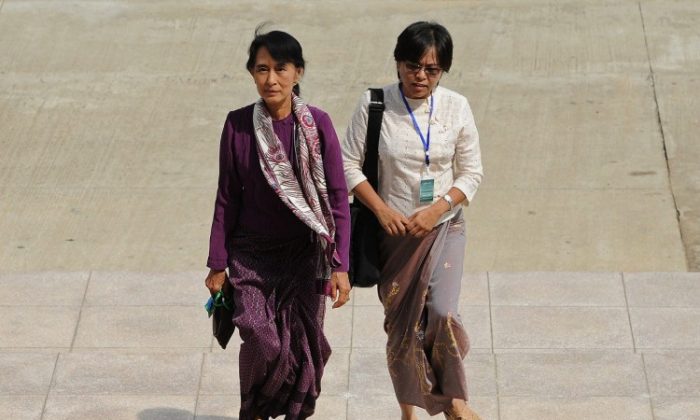 Burmese opposition leader Aung San Suu Kyi (L) arrives at the Lower House of Parliament for her swearing in ceremony in Naypyidaw, Burma on May 2. (Soe Than Win/AFP/GettyImages)
World

The historic swearing in was supposed to happen on April 23, but Suu Kyi and 42 other members of her National League for Democracy (NLD) party boycotted the ceremony, rejecting wording in Burma’s oath of office requiring members of Parliament to “safeguard” the constitution. They wanted to change the wording to “respect” the constitution instead.

Tim Aye-Hardy, director of the New York-based Burma Global Action Network, thinks Suu Kyi’s handling of the oath was a tactical mistake. “To take the military-drafted constitutional oath after giving much hype on changing the wording shows lack of planning, communication, and a bit of desperation,” he commented in an email.

“They should’ve known better that changing the word from ‘safeguard’ to ‘respect’ may seem rather simple and straightforward,” added Aye-Hardy.

On April 1, Suu Kyi and the NLD swept a set of by-elections. It was the NLD’s second election victory in 22 years. In 1990, they won a landslide victory but Suu Kyi was arrested and the junta ignored the results.

Suu Kyi spent the better part of the next two decades in detention, becoming one of the world’s most prominent political prisoners. She was released in November 2010.

Her win in April is significant in terms of the symbolism of Burma’s recent political reforms. But the NLD’s small caucus means they have scant real political power. One of the party’s main priorities is to change the pro-military constitution, which reserves 25 percent of the Assembly for unelected military officers. To accomplish that, she will have to face more compromises.

Suu Kyi also said she will use her time in office to “expand the space of the opposition” and become friendly with the military and ruling party to convince them she is not trying to overtake them.

“We would like our Parliament to be in line with genuine democratic values. It’s not because we want to remove anybody,” she said. “We just want to make the kind of improvements that will make our national Assembly a truly democratic one.”

Burma’s democratic reforms over the past year under former general, President Thein Sein have been hailed by the United States, European Union, and the United Nations. The most recent high-level official to visit the country, U.N. Secretary-General Ban Ki-moon, said reforms would benefit the Burmese economy.

However, pro-democracy groups have repeatedly pointed out that there are still hundreds of political prisoners locked up in the country, and government forces are still waging deadly attacks against the Kachin ethnic rebel group in northeastern Burma.