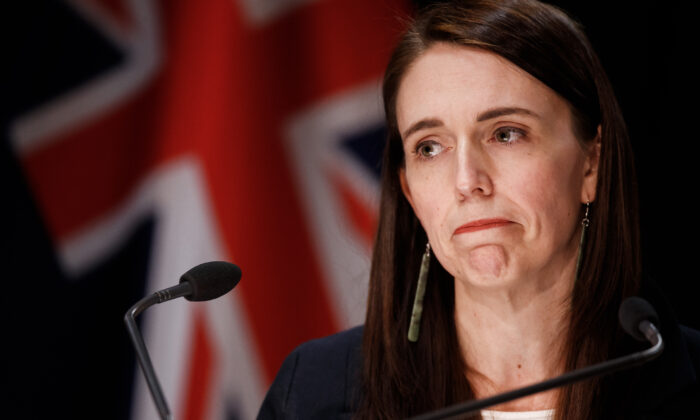 Prime Minister Jacinda Ardern speaks to the media at a press conference with the details of the Auckland supermarket terror attack, at the Beehive Theatrette in Wellington, New Zealand, on Sept. 3, 2021. (Robert Kitchin - Pool/Getty Images)
Australia

The “historic” trilateral security pact between Australia, the United States, and the UK will take precedence over the existing and long-running ANZUS treaty involving New Zealand and the U.S.

“The ANZUS will fade into the background compared to this,” he told The Epoch Times. “This is two major powers working together. So, the UK replaces New Zealand, which is what I always thought would happen after the Cold War was over.”

“This arrangement is a reaffirmation of multilateralism where you have several countries working together, whether it’s in trade, defence, or water, you know it’s a victory for multilateralism, as opposed to bilateralism,” he added, noting that it would be effective in opposing Beijing, who tended to “pick off its enemies one at a time.”

ANZUS was established in 1951 as a non-binding security arrangement to combat the threat of communism during the Cold War.

New Zealand was suspended from the agreement in 1986 after passing laws not allowing nuclear-powered ships into its waters. However, in 2012, it lifted its ban on U.S. warships.

At the heart of AUKUS, the U.S. and UK governments will assist Australia over the next 18-months with “pathways” towards acquiring at least eight nuclear-powered submarines, amid ongoing tensions with the Chinese Communist Party (CCP) in the region.

It also adds an extra dimension to the existing Five Eyes’ arrangement, which has been the main intelligence sharing network between Australia, UK, United States, Canada, and New Zealand—and has, of late, been a platform for democratic allies to engage on issues related to countering CCP aggression.

An issue NZ opposition leader Judith Collins was concerned with.

“New Zealand is not interested in the nuclear side of the new partnership, but the deeper integration of technology, artificial intelligence and information sharing as well as security and defence-related science, industrial bases and supply chains are areas we would traditionally be involved in,” she said in a statement.

Ardern’s government has faced criticism in recent months for its approach to China, which has been described as “too subtle” for international observers to notice.

In contrast, Australia—which lies just across the Tasman Sea—has been engaged in a year-long trade dispute with China, which began after Foreign Minister Marise Payne called for an investigation into the origins of COVID-19.