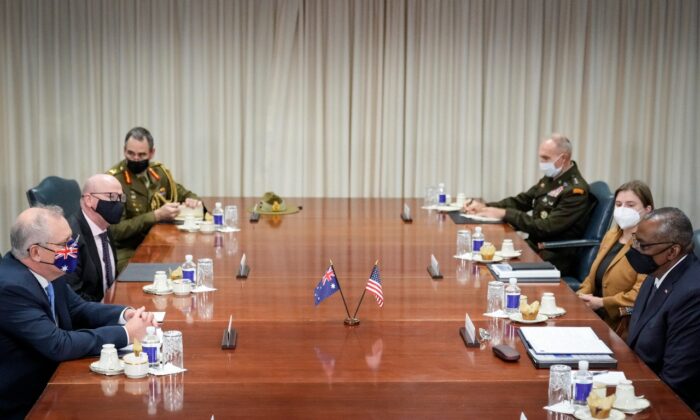 The new trilateral security agreement between Australia, the United Kingdom, and the United States, known as “AUKUS,” will see the nations coordinate closely on developing joint cyber capabilities in addition to furnishing Australia with American nuclear submarine technology.

The leaders of the three nations, in a Sept. 15 joint statement, said that they would coordinate closely on jointly developing “cyber capabilities, artificial intelligence, quantum technologies, and additional undersea capabilities.”

Experts believe that such coordination on critical technologies will meaningfully enhance allied capabilities with regard to countering the Chinese Communist Party (CCP) and deterring overt conflict amid an increasingly tense international scene.

Building the Joint Force of the Future

John Mills, former director of cybersecurity policy, strategy, and international affairs at the Department of Defense, explained that the importance of such efforts to develop cyber capabilities was linked to the need of allied nations to develop forces capable of working in unison.

“A critical part of why bilateral and multilateral agreements and treaties are so important is the concept of ‘interoperability,’” Mills said.

Interoperability—the ability of nations to jointly fight as a single force—would be particularly vital after Australia completes its new fleet of nuclear submarines, he said.

At that stage, all three AUKUS nations will effectively be fielding different models of the same torpedo technology, and improved interoperability between their systems will allow for much more seamless integration of their respective fighting forces.

“The interoperability of platforms and weapons systems are very important and a huge force multiplier,” Mills said. “Which is intimidating to potential adversaries like China because they don’t have any agreements like that.”

Sam Kessler, a geopolitical adviser at the multinational risk management company North Star Support Group, told The Epoch Times in an email that such an effort also strengthened the AUKUS nations’ commitment to multilateralism as a key strategy in countering CCP aggression and promoting a “free and open Indo-Pacific.”

“Interoperability and collaboration via AUKUS reaffirms the long-term relationship between the U.S., UK, and Australia as they venture toward the next stage of alliance development and evolution,” Kessler wrote.

“Sharing this military technology not only illustrates a level of trust and commitment to working and operating together, but also provides the United States with partners that are invested in the same goals and interests in promoting regional stability and security,” he added.

Such commitment comes at a time when the CCP is engaged in a military buildup explicitly designed for the purpose of dislodging the United States from the Pacific, and when emergent technologies such as artificial intelligence and quantum computing are becoming vital to the military’s ability to analyze big data quickly and securely.

Security experts have called for a ban on technology transfers to China in order to prevent the secrets of such technologies from being replicated and exploited by the CCP and the People’s Liberation Army.

But, for now, the Western allies maintain a competitive advantage in high-tech fields that Kessler believed they would continue to invest in.

“Sharing AI and quantum computing technologies with these close allies enables both reliable and capable partners to not only share the burden at every level of the relationship, but also helps the U.S. not bear the responsibility alone while still preserving a competitive advantage.”

“The way the U.S. military operates and fights wars is evolving and the relationship with AUKUS could very likely play an instrumental role in developing that evolution,” Kessler said.

For his part, Mills believed AUKUS and its dedication to developing shared defense platforms between the allies was a first major step in creating an alliance framework that could feasibly deter the CCP from aggression, but he hoped that more would follow.

“[AUKUS] is a huge step,” Mills said. “It’s a formidable force for China to overcome. It’s almost unassailable and the Chinese know that.”

Mills traced AUKUS’ origins to the intelligence sharing agreement between Australia, Canada, New Zealand, the UK, and the United States, colloquially known as “The Five Eyes,” and said that the objectives-based nature of AUKUS gave it an increased potency in solving the problem of growing CCP aggression.

“We have longstanding agreements within Five Eyes that really give us an incredible force multiplier because of our ability to share and collaborate on cyber and cyber security,” Mills said.

“The Five Eyes has a strong heritage, and this has now been applied in a more targeted, precise way to deal with deterrence and containment against China.”

Kessler agreed that AUKUS and its focus on developing shared platforms and boosting interoperability was useful in deterring China from taking overt action against the allies, but that the CCP could adapt by doubling down on information operations and other efforts designed to sow discord within or cast doubts on AUKUS in the greater international community.

“At this stage, the Chinese may just continue to maintain their practices of applying soft power and subversive tactics to try to develop wedges between allies and partners, as well as creating weaknesses, vulnerabilities, and finding ways to generate compromised and complicit actors,” Kessler said.

“Tensions in the region are very high at the moment and the domestic situation within China may determine their outward actions as well, whether it actually is about expansionism or just to preserve their current realm of influence for the sake of state survivability.”