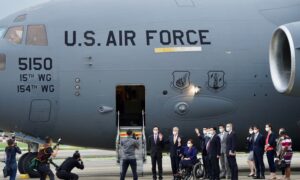 Taiwan Is a Sovereign Democracy, Worth Defending as We Would Our Own
0
Share Now
TelegramFacebookTweetEmailTellMeWeReddit
Copy Link 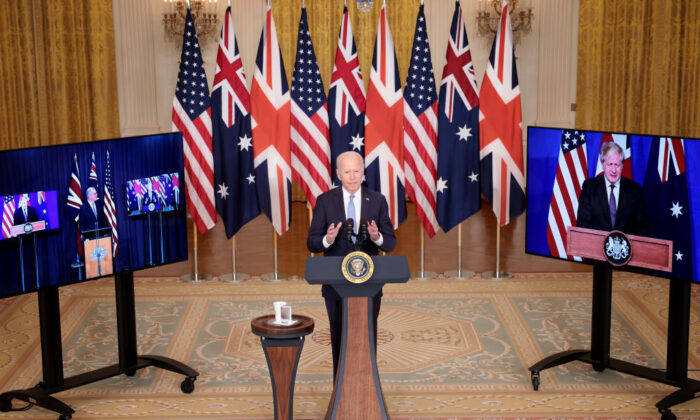 U.S. President Joe Biden speaks during an event in the East Room of the White House in Washington D.C. on Sept. 15, 2021. (Win McNamee/Getty Images)
Australia

AUKUS Benefits Both the US and Australia

The transfer of Washington’s most sensitive undersea technologies constitutes the most significant upgrade in defence cooperation between the two countries since the first Australian-United States Joint Facilities commenced operation in Pine Gap more than 50 years ago.

For Australia the benefits are apparent. It will join six other countries, globally, that operate nuclear-powered submarines, and it will be the only one to do so without also possessing nuclear weapons.

But he insists “this is not about acquiring nuclear weapons.”

“Australia has no interest in that. No plans for it, no contemplation of it,” Morrison said.

Meanwhile, America’s purpose for the intensive collaboration is about positioning itself firmly in Asia-pacific theatre to meet any Chinese bid for primacy in the region.

To this end, America has deepened its collective defence partnerships with both Japan and Australia.  But Washington clearly recognises that to achieve its long-term supremacy in the Pacific, Australia must be able to project power—and nuclear-powered submarines are the ideal platform for the island nation.

It is a move also supported by the Pentagon’s 2018 National Security Strategy, Elbridge Colby, who told the Centre For Independent Studies Tom Switzer, that Australia would now be able meaningfully to contribute to the U.S.’s core coalition with Japan and Australia to counter China’s growing threat in the Asia-pacific.

“I think it’s a very positive step,” Colby said. “It’s significant militarily in the way that it gives Australia the ability to contribute to collective defence scenarios that we really need to work on.”

He also views Australia as the U.S. best ally.

“Australia is America’s best ally in the sense that Australia is the most aligned with us, is spending the most on defence and are willing to take risks, and we’re helping you to do so,” Colby said.

This is not the first time the United States has suggested helping Australia acquire nuclear-powered submarines.

In 2012 under the Obama Administration, the then U.S. Ambassador to Australia, Jeffrey Bleich, floated the possibility of Australia acquiring America’s Virginia class nuclear-powered attack submarine after he noted America was concerned over Australia’s ability to protect its territorial waters.

“Decisions about the design of the Australian submarine are up to Australia’s leaders, including whether they pursue diesel power or nuclear power,” said Bleich at the time, “Whatever they decide the US is willing to help.”

It is speculated the offer was rejected because the size of America’s nuclear-powered submarines limits their operational utility in the shallow waters around Australia’s coastline.

Australia is Well Placed to Make the Change to Nuclear

Over the next 18 months, AUKUS partners will investigate how Australia will build the submarines and maintain them. But the key to this endeavour will be a significant upgrade of Australia’s nuclear infrastructure.

Professor Andrew Stuchbery, Head of Australia’s Department of Nuclear Physics at the Australian National University, told The Epoch Times that the developments will need a range of skills and technologies “spanning nuclear physics, nuclear engineering, and nuclear regulation.”

“The specifics will depend on how much maintenance, and particularly refuelling is done on-shore in Australia,” Stuchbery said.

Although American and British technical support will be needed while Australia’s own capacity is built up, the professor notes that Australia is starting from a strong position.

“The decision to build the submarines in Australia enables the parallel development of relevant skills in an Australian workforce for ongoing maintenance and operation,” he said.

“In terms of new requirements for nuclear regulation, safety and security, Australia has an excellent record on which to build.”