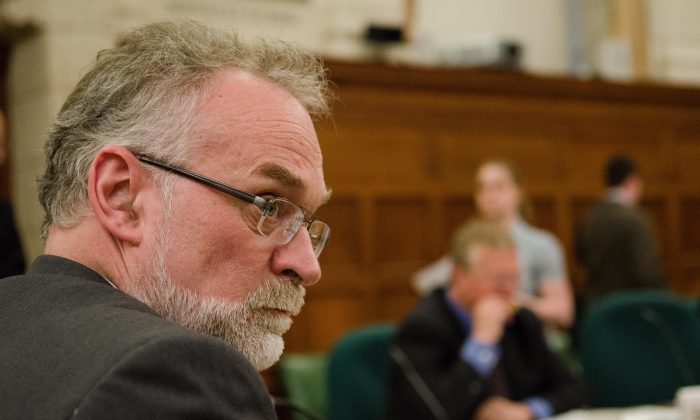 OTTAWA—The federal auditor general says he’s been unable to properly track as much as $3.1 billion in funding set aside to combat terrorism.

Michael Ferguson’s spring report says the Conservative government must do a better job in reporting how taxpayer money is spent.

Ferguson’s review of the Public Security and Anti-Terrorism Initiative found a paper trail for $9.8 billion of the $12.9 billion spent between 2001 and 2009 on a myriad of anti-terrorism programs.

Ferguson said he’s not concerned the money is missing or has been misappropriated, but rather the federal Treasury Board is unable to say clearly how all the cash was spent.

Treasury Board quickly moved to counter the observation on Tuesday, filling in the blanks for at least $1.5 billion of the poorly accounted money.

Some of the $3.1 billion was simply not spent, carried over into later years, reallocated to other programs, among other accounting moves, a spokeswoman said.

For example, the Canadian Air Traffic Security Agency did not spend a budgeted $118 million over several years, and publicly reported that unspent money in its annual reports.

“The (auditor general) did not go to the individual departments to solicit this information,” Andrea Mandel-Campbell said in an email.

“The (auditor general) only went to TBS and audited the submissions presented to TBS.”

The Opposition parties seized on the murky money finding during question period in the House of Commons, with NDP Leader Tom Mulcair accusing the government of presiding over a boondoggle.

Prime Minister Stephen Harper conceded that there is “some lack clarity” in how the cash was allocated, but that the government is improving its process.

The report is bruising for the Conservatives who’ve built their reputation on being prudent with the public purse.

A year ago, the auditor general drew attention to runaway cost concerns and secrecy over the F-35 stealth fighter, another issue where Tories felt their image took a beating.

Ferguson’s report acknowledged three possible scenarios for what happened to the money.

Departments may have been unable to spend the cash, and under federal law they must return that to the central treasury.

Another possibility is that the money was miscoded and spent as part of continuing programs, or it could have moved over to another budget year and allocated to non-terrorism related initiatives.

“We didn’t find anything that gave us cause for concern that the money, you know, was used in any way that it should not have been,” Ferguson said.

“However, you know, it’s important for there to be, you know, a way for people to understand how this money was spent and that summary reporting was not done.”

Treasury Board President Tony Clement defended the government, noting there are no allegations of misspent money.

He says Parliament has been kept informed on spending through the presentation of annual budget estimates.

“All government spending, every nickel and dime is reported to Parliament and accounted for each and every year in the public accounts,” Clement said following the release of the report Tuesday.

Clement said his department accepts the auditor general’s recommendation and will provide a clear picture of spending and results for government-wide programs.

But that clearer picture won’t be available until 2014 with the introduction of a new system.

Part of the problem, according to the auditor’s report, is that the Treasury Board expects departments to conduct their own evaluations of spending, rather than providing such oversight itself.

When evaluations were conducted, Ferguson says the spending met the guidelines in about 89 percent of the cases.