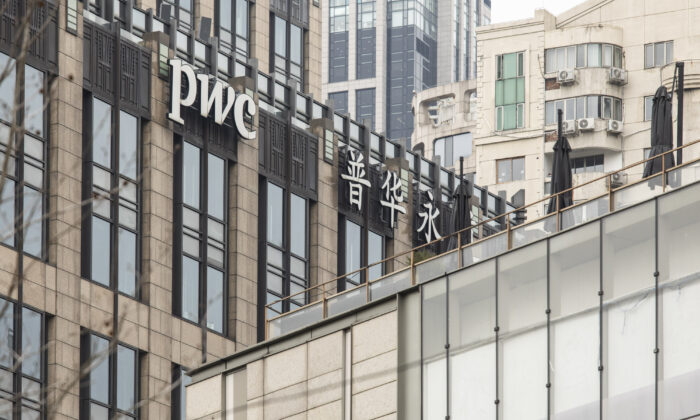 The PwC Center in Shanghai on Jan. 29, 2022. Fresh signs of contagion are rippling through China's property industry, with a spate of auditor resignations deepening concerns about developers' financial health in the run-up to earnings season. (Qilai Shen/Bloomberg via Getty Images)
Thinking About China

The world of financial auditing is rarely the center of attention. In fact, most auditors operate under the simple premise that no news is good news. In China, auditing is at the center of a major problem for real estate developers and the Chinese stock markets in Shanghai and Hong Kong.

Auditors are required for most companies raising capital on public debt or equity markets anywhere in the world. The auditor’s role is to double-check and confirm companies’ financial statements. Unglamorous and conflictual by definition, the work consists of verifying receipts, cash balances, and vendors to ensure companies’ financial statements present a fair and accurate picture of the corporate finances. Despite the nature of the work, it’s vital to maintain confidence in capital markets and ensure that information is transparent.

PwC didn’t resign because it has concerns about ethics, but rather due to the legal and financial risk of being the auditor of record for firms facing bankruptcy.

There are already examples of risk to auditors, such as when Evergrande announced $2 billion in declared cash seized by banks, which wasn’t reported as secured to guarantee a debt. We don’t know whether Evergrande withheld this information or PwC omitted it from audit records. Still, PwC felt increasingly uncomfortable being the auditor of record for so many firms facing bankruptcy.

The problem firms face isn’t simply their auditors walking away, but that they will be delisted until they become compliant due to stock market rules. Here’s where it gets a little tricky.

Delisting from a stock market may sound like a punishment. But watching how China routinely shuts down financial markets—whether in domestic stocks or foreign commodities trading at the London Metals Exchange—seems like a preferred route for firms and Chinese regulators. For a firm on edge, being delisted for one to two years, with little pressure from litigious securities lawyers or regulators pushing hard, may be more welcomed than feared.

There are two specific classes of stakeholders here that should be considered.

First, what about the shareholders? For the most part, there is little they can do. Trading is effectively frozen once they’re delisted, and definitely at anything close to the historical market price. The shareholders are effectively stuck with little or no recourse through the courts, and the government is actively warning institutional investors not to do anything. This is the risk of investing in China.

Second, however, the regulators and central planners in Beijing are likely happy with the trading shutdown. With an economy highly dependent on credit flows to boost real estate development and broader economic activity, they are not shedding tears at the end of public financial reports and auditors poking around such risky firms.

If history is any guide, Beijing is likely to use a couple of years to shut down to sell off some firms to bigger and less bad developers. In today’s world, there are no strong Chinese developers, only less bad, who are likely to be forced into swallowing their weaker rivals to prevent a collapse of the industry.

There’s a lesson here. China prides itself in having the trappings of a developed market and economy. Beijing woos the world’s largest banks, promising them a slice of the vast Chinese market for help pressuring their home market to ease up on pressuring China.

However, the reality is that no one—not even the auditor—really knows what’s in a Chinese financial statement and that there is effectively no legal recourse. That’s the real story of Chinese firms and the economy reliant on state favor—questionable data and no rule of law.

Warren Buffett once notably said, “It’s only when the tide goes out that you learn who’s been swimming naked.” Investors overlooked a lot of problems for years when Chinese real estate was booming. Now that the tide is heading out, financial statements and the rule of law matter.