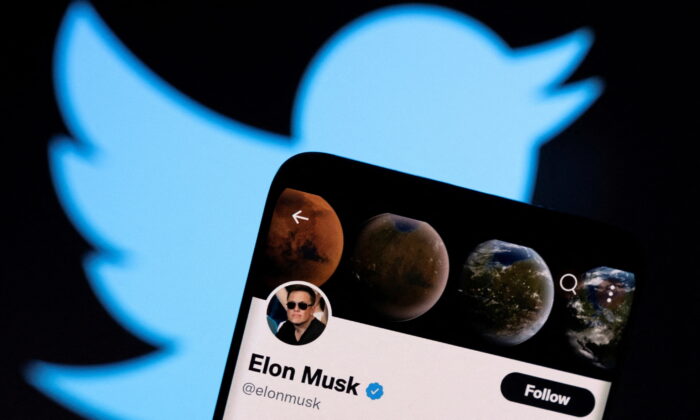 Elon Musk's Twitter account is seen on a smartphone in front of the Twitter logo in this photo illustration taken on April 15, 2022. (Dado Ruvic/Reuters)
Social Media

Nearly half of President Joe Biden’s followers on Twitter, which number about 22.2 million, are fake accounts, according to an audit conducted by Newsweek.

This comes just as billionaire entrepreneur Elon Musk has paused his plans to buy Twitter for $44 billion due to concerns about fake accounts.

“20% fake/spam accounts, while 4 times what Twitter claims, could be *much* higher. My offer was based on Twitter’s SEC filings being accurate. Yesterday, Twitter’s CEO publicly refused to show proof of <5%. This deal cannot move forward until he does,” Musk wrote in a May 17 tweet.

Having 20 percent fewer users would mean that the company might be overvalued. As such, paying $44 billion with one in five users being fake might not be a good deal.

Musk had agreed to purchase Twitter at $54.20 per share. If he were to back out from the deal, the entrepreneur would be required to pay the company a termination fee of $1 billion and might face litigation.

According to a joint analysis published on May 15 by SparkToro and Followerwonk, 19.42 percent of a sampled set of Twitter accounts were found to be fake or spam accounts.

For the analysis, they used 44,058 public Twitter accounts that were active during the previous 90 days, selected randomly from a set of more than 130 million active public profiles.

“We suspend over half a million spam accounts every day, usually before any of you even see them on Twitter. We also lock millions of accounts each week that we suspect may be spam—if they can’t pass human verification challenges (captchas, phone verification, etc),” Agrawal wrote.

However, the “hard challenge” is that many accounts that seem fake are actually profiles of real people, he said. In contrast, some of the spam accounts can appear totally legitimate but might end up being the “most dangerous.”

According to the company’s estimates every quarter, fewer than 5 percent of monetizable daily active users (mDAU) are spam accounts. For the last four quarters, these estimates have held up, Agrawal claimed, while insisting that the error margins on the estimates give the company confidence in its public statements.

But the company’s estimates cannot be mimicked by third parties because Twitter can’t share the private user information that would be required to do such an analysis, he added.

“Let me state the obvious: spam harms the experience for real people on Twitter, and therefore can harm our business. As such, we are strongly incentivized to detect and remove as much spam as we possibly can, every single day. Anyone who suggests otherwise is just wrong,” Agrawal said.