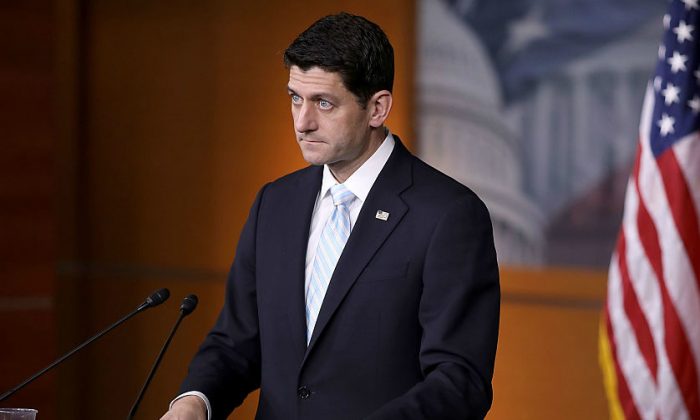 Breitbart News posted the audio, dated Oct. 10, 2016, online on March 14. He made the comments right after an Access Hollywood tape of Trump was published in the weeks before Election Day. Other news outlets that confirmed Ryan made the statements.

“I am not going to defend Donald Trump—not now, not in the future,” Ryan says in the recording.

The publication of the audio comes as enmity grows between Ryan, a Congressman from Wisconsin, and Breitbart, a site that was formerly run by Trump adviser Steve Bannon.

For months now, Breitbart has been firing salvos at Ryan for his then-tepid support of Trump during the campaign. In mid-October, the right-wing website published its lead story with the headline: “He’s with her: Inside Paul Ryan’s months-long campaign to elect Hillary Clinton president.” The story was written by former Breitbart writer Julia Hahn, a known Ryan critic, who was hired by Bannon as a White House aide in January.

“His comments are not anywhere in keeping with our party’s principles and values,” Ryan said in the recording. The comments have been previously reported but the audio didn’t surface until now.

“There are basically two things that I want to make really clear, as for myself, as your Speaker,” Ryan added. “I am not going to defend Donald Trump—not now, not in the future. As you probably heard, I disinvited him from my first congressional district GOP event this weekend—a thing I do every year. And I’m not going to be campaigning with him over the next 30 days.”

Following Election Day’s results, it was reported that Breitbart had no plans to let up attacks on Ryan, who was seeking reelection as House Speaker. “Ryan will not get amnesty for his actions against the conservative movement and the American people,” The Hill quoted a source familiar with Breitbart’s internal deliberations as saying in November.

Bannon, according to The Hill’s sources, apparently views Ryan as a “globalist” who is not much different than former Democratic presidential candidate Hillary Clinton.

Neither Trump or Ryan have publicly commented on the publication of the audio. Ryan spokesman Brendan Buck told Breitbart on Tuesday: “The world is well aware of this history.” He added,  “And obviously a lot has happened since then. As everyone knows.”

“This was in response to that, but as everyone knows, they came together toward the end of the campaign and the speaker vocally supported him and even campaigned with Pence,” Buck said, although Ryan never campaigned for Trump.

“This report confirms that the American Health Care Act will lower premiums and improve access to quality, affordable care,” Ryan said in a statement.

He added: “CBO also finds that this legislation will provide massive tax relief, dramatically reduce the deficit, and make the most fundamental entitlement reform in more than a generation. These are things we are achieving in just the first of a three-pronged approach.”