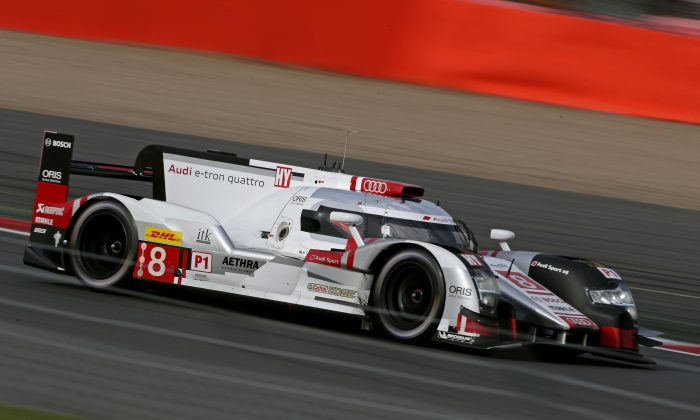 Sports writers tend to make every event sound like an epic exercise in athletic competition, rife with drama and studded with amazing stories.

Every so often there is an event which actually exceeds those exaggerations; in which case, what is a sportswriter to do?

The FIA World Endurance Championship Six Hours of Silverstone was such a race. Six of the fastest, most advanced automobiles on the planet raced flat-out for six hours; after 201 laps (a new course record) five were still racing at full pace; the winning #7 Adu R18 e-tron quattro had a gap of less than five second over the second-placed #18 Porsche 919 Hybrid, and 15 over the third-placed #1 Toyota TS 040 Hybrid.

“A perfect day for Audi and our team,” Audi driver André Lotterer said in a press statement. “We were under pressure from the first to the last lap and could not afford to slip. We managed to do this and the team did everything at the pit stops and with the perfect strategy.

“Now, we’re going to take this momentum with us to Spa and to Le Mans.”

The winning Audi started the race with electrical failure; the car wouldn’t launch when the green flag waved, and dropped back two-thirds of the way through the field. Bernard Tréluyer fought back to the front before handing off to Marcel Fässler, who drove an heroic triple stint before turning the car over to André Lotterer.

Porsche controlled the race for the first 44 laps, when Mark Webber brought the #17 into the garage with a ruined transmission. Audi and Toyota fought hard over third through fifth until Webber retired, then started chasing Mark Lieb in the #18. Benôit Tréluyer in the #7 Audi hounded Lieb until both pitted on laps 52 and 53.

Alex Wurz in the #2 Toyota inherited the lead when the rest of the leaders pitted; tens econds behind him came Porsche, Audi, the second Toyota, and the other Audi.

Most motor racing features overtaking; at Silverstone, there were more passes per lap for a dozen laps that most Formula One races have in two hours. Between laps 54 and 67 the #18 Porsche driven by Marcel Fässler and the #7 Audi , driven by Neel Jani, swapped second place a couple of times per lap at least. Fässler pushed the high-downforce Audi past on the outside of every corner, while Jani used the Porsche’s 8-megajoule ERS system to accelerate back ahead on every straight no matter how short.

Even the racers’ fellow drivers took note. “The gripping duel between Marcel Fässler and Porsche driver Neel Jani across many laps in which the two Swiss overtook each other several times per lap was particularly impressive,” André Lotterer said later.

There was more racing action in these 40 or so minutes than in most half-hour highlight reels—and while those two cars were fighting there were similar battles all throughout the rest of the fields.

Finally Jani had to admit defeat; he was ready to keep fighting, but his right rear brake was overheating. Porsche, seeing they couldn’t match Audi on pure pace, decided to stretch its fuel instead. Meanwhile Toyota proved it could double-stint its tires, and took the lead via a quicker pit stop.

Audi responded in kind, and still kept the pace high enough that Porsche couldn’t quite shrink the gap to less than the length of a pit stop.

Neel Jani did his best, taking only a left front tire at his last stop on lap 172 in an effort to maintain track position, but he came out a minute behind the leading Audi and just lacked enough laps to close the gap.

As the race ran down, it seemed that whichever team could do the most precise time fuel fill might take the win. Toyota came in first, but took almost 30 seconds of fuel, and fell to third. Then, with 18 laps left, as Audi was about to pit, the #7 car was given a stop-and-go penalty for exceeding track limits.

This was an exceedingly questionable call. in the incident in question, the leading Audi and Porsche exited Club Corner at full chat they came upon a GTE Aston Martin; both ran wide to avoid a major collision. Every P1 car had exited wide at that corner repeatedly throughout the race, and continued to do so after Audi was penalized; but only that one instance was called.

Possibly Race Director Eduardo Freitas decided that since the Audi cut in front of the Aston while the Porsche went behind, the Audi impeded the GTE car. In any case, the penalty was called, and it seemed Audi was going to lose the race.

Leena Gade, engineer for the #7 Audi, had no intention of quitting. She told Marcel Fässler to pit for fuel only, a ten-second timed fill, to get the car back out on track without losing the lead. She let Fassler stretch the gap for a lap and then called him in to serve the penalty.

This strategy kept Fässler in the lead, if only by a few seconds, and Fässler was not about to let go of victory at this point.

Neel Jani in the Porsche pushed as hard as he could cutting the gap in half, but he didn’t have enough laps. Sébastien Buemi ion the #1 Toyota likewise pushed hard, but couldn’t catch the two leaders.

“Congratulations to Marcel, André and Ben, who delivered fantastic motorsport for six hours today,” said Head of Audi Motorsport Dr. Wolfgang Ullrich in a press release. “This victory is a dream start of the season and a great reward for the whole squad for the hard work last winter. At the same time, this success motivates us even more for the great challenges awaiting us the next few weeks. The weekend at Silverstone has also shown that we could be facing what may be the most thrilling and fiercely contested WEC season ever.”

Despite the intense action there were very few collisions and only two caution periods, both handled excellently by the Virtual Safety Car, WEC’s version of Code 60. Only four laps were lost out of 201 total, despite there being 29 cars on track in four classes, all racing hard for six hours.

These are the fastest sports cars on the planet, the most technologically advanced racing cars in existence. Unlike some other very fast, very advanced racing series, the WEC season opener offered six hours of door-to-door racing, at what Daily Sports car’s Graham Goodwin called. “cartoon levels of performance”—the cars changed speed and direction so quickly they didn’t look real.

The #7 Audi crossed the finish line only 4.6 seconds ahead of the #18 Porsche after six hours of flat-out racing. The third-placed Toyota was another ten seconds back. Three unique cars powered by radically different systems, and not until the last five minutes of the race could anyone make a sensible guess as to which might win.

Not only were the motors and ERS systems very different, so were the ways each car made its speed. Audi went for maximum downforce for its R18 e-tron quattros. After months of development, Audi engineers came up with a package with acceptable drag and so much downforce the cars could drive by their opponents on the outside of corners, seemingly at will. The Audis were down 20 kph in top speed and couldn’t accelerate like the Porsches and Toyotas, with their bigger hybrid systems, but the Audis were unstoppable through the corners.

Silverstone, with its 20 corners in 3.66 miles of track, suited the Audis well. The Porsches could stay ahead, but had to work too hard to do it. The Toyotas couldn’t keep up.

The Porsche 919 Hybrids have by far the smallest engine, but its battery packs are one-third more powerful than last year while not weighing any more. The Porsches couldn’t corner as fast as the Audis, but with the instant power from the batteries coupled by the quick-revving V4, the 919s could pass the Audis on the shortest of straights. The Porsches are more suited to tracks like Le Mans with its long, long straights but were still impressive at Silverstone.

Toyota chose the middle way; less than maximum hybrid power, and less than maximum downforce. The Toyota TS 040 Hybrids were almost as fast, but not as quick as the Porsche, and less nimble but not much quicker than the Audis. Apparently Toyota was having trouble harvesting a full charge on Silverstone’s shortish straights, which left the car underpowered at corner exit. Toyota decided to use strategy to win, since it couldn’t use pace, and it very nearly worked.

After six hours, however, it was Audi in the lead, making up for a terrible race at Silverstone in 2014 which saw both cars written off in accidents. Audis finished first and fifth after the #8 lost time with a couple of different problems related mostly to contact and off-track excursions. Toyota took third and fourth, despite the #2 car getting hit and having to pit for adjustments.

Engineers from all three teams are going to spend the next few weeks reviewing data and making adjustments for the next race, the Six Hours of Spa on May 2. Spa is a much different track than Silverstone; two-thirds are dangerously fast, while the remaining third is dangerously twisty. Which team will come up with the best compromise in set-up? Or will an extreme approach work there as well?

After Silverstone, the only certainty is that sports car fans are already excited for Spa, and about the rest of the season.

Tickets for the WEC Six Hours of Spa-Francorchamps are available online. The race will be broadcast in its entirety by Fox Sports 1; timing and scoring and other viewing options are avbailable through live.fiawec.com.