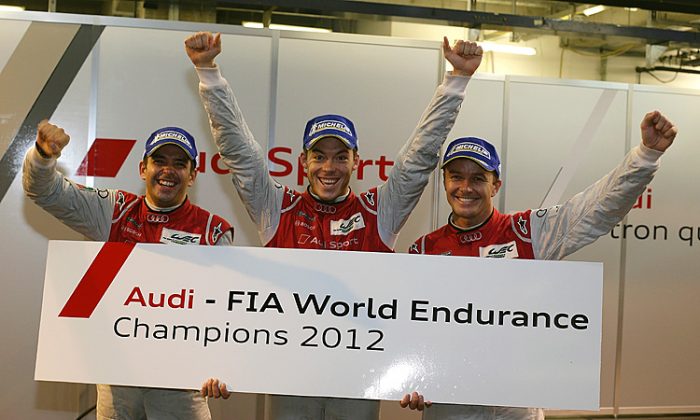 2012 can be counted as a very successful year for Audi Motorsport’s endurance-racing division: after introducing two new cars and two new technologies at the start of the season, Audi went on to win the World Endurance Championship drivers’ and constructors’ titles.

Both vehicles performed excellently all season long; the team saw no structural or mechanical failures throughout the season.

At the wheels of these advanced prototypes were the driving teams of Marcel Fässler, André Lotterer and Benoît Tréluyer in the #1 e-tron, and veterans Tom Kristensen and Allan McNish in the #2 R18 Ultra which was converted into another e-tron halfway through the season.

Fässler, Lotterer and Tréluyer captured the drivers’ title by a margin of 13.5 points over their team mates; the trio scored three victories and three runner-up results in eight races, including a win at Le Mans.

Kristensen and McNish turned in an admirable performance, with seven podium finishes and awin at the 12 Hours of Sebring. This pairing also won the Michelin Green-X Challenge for going fastest and farthest with the smallest carbon footprint at seven of the eight rounds.

“Now we’ve won all the titles,” said Audi Sport Team Joest technical director Ralf Jüttner in a press statement. “The WEC is a fantastic new championship and we’re the first to have won it.”

Despite losing three of the last four rounds to Toyota, Audi has much to be proud of. The team cannot afford to rest on its laurels, as Toyota will be back stronger in 2013, but one would not expect Audi to slack off anyway. Dr. Wolfgang Ullrich, Head of Audi Motorsport, reinforced that thought.

“It’s nice that after the Manufacturers’ World Championship we were able to decide the Drivers’ World Championship in our favor as well, said Dr. Wolfgang Ullrich. “Unfortunately, we weren’t able to finish the year with a victory in China. We’ve got very strong competitors, which provides us with high motivation to work hard for next year.”

2013 promises to be a banner year in sports car endurance racing.