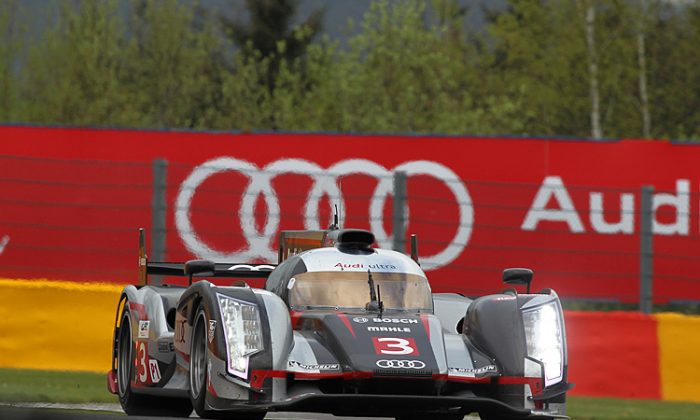 Audi Sweeps Everything at the FIA-WEC Six Hours of Spa

The final result of the FIA World Endurance Championship’s second round the Six Hours of Spa, was questionable only as to the precise details; broadly, everyone knew in advance Audi would win.

While the overall outcome was never in question, several issues remained to be resolved. Among them: how far off were the gasoline-powered privateers compared to the factory behemoth’s turbodiesel hybrids; how well would said hybrids run in their first race; would Audi’s drivers get caught up in traffic and left by the roadside waiting for wreckers; and how well would the also-rans run, considering they would be there to take over if Audi miscalculated?

The race was all Audi, all the way; there were no major miscalculations this time. Audi held the top four positions from the first practice session until the podium ceremonies were over.

André Lotterer in the #1 e-tron quattro passed Mark Bonanomi at the start and then Tom Kristensen for the lead on lap three. The #1 car led until Lôic Duval took the lead on lap 63; the #3 car led for the remaining three-and-a-half hours.

“We had a perfect race. My team-mates and our squad showed a brilliant performance. Our strategy was right on the mark and our fuel consumption was low. That paid off. That way, we increased our advantage,” said Romain Dumas, who drove the last stint in the #3 Audi. “The tires were very good, that’s why I opted not to change tires in the end. That was another reason for our success.”

“Today, we experienced a surprise,” said Lôic Duval in the same Audi press release. “This was only my second race with Audi and already my first victory. As always, there wasn’t a single problem when I’m sitting in an Audi.

“The conditions were very difficult in the beginning but the car was fantastic. We had no problems whatsoever. It’s a nice result for Audi to finish on positions one, two, three and four. I’m very happy to be on the very top of the podium.”

For Mark Bonanomi and Oliver Jarvis, this was their Audi endurance-racing debut.

“It was really a great race. This was my first one in an Audi sports prototype, so I can’t expect any more than this,” said Bonanomi. “Yesterday, we were second in qualifying and today we finished in third place. The pit crew did tremendous stops. Unfortunately, we struck by misfortune during the first safety car period and lost one lap at the red lights at the end of the pit lane.”

Oliver Jarvis was equally happy. “A great day. The most important thing was to not make any mistakes and to complete as many kilometers as possible. We may be inexperienced but the pace was there. Now the wish remains to finish on the podium at Le Mans as well—maybe we’ll even move up a bit more.”

Kristensen, Allan McNish, and Dindo Caprello lost time due to a tires top and stop-and-go penalty with siz laps remaining—apparently the team was worried about rear tire wear, and opted to play it safe. The stop alone might not have hurt so much, but adding the penalty—in effect, another entire pit stop—dropped the car to fourth.