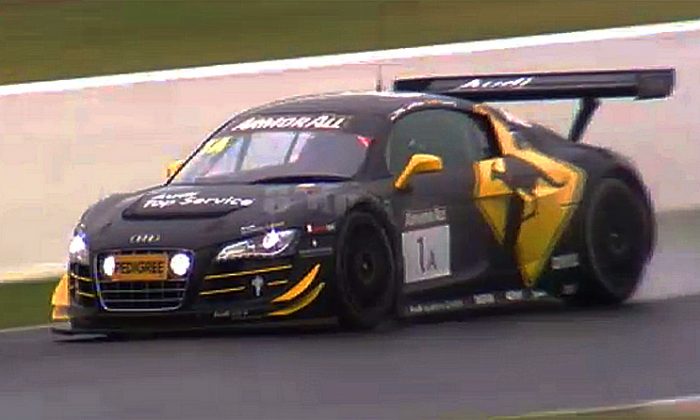 After winning 1–2 at the 2011 Bathurst 12 Hours in its first foray, Audi returned to New South Wales to defend its title at one of Australia’s most picturesque and challenging tracks, the Mount Panorama circuit.

Audi didn’t quite equal its 2011 feat, but the German auto maker did achieve its most important objective: winning the 2012 Bathurst 12 Hours.

With two-thirds of its 2011 driving team—Christian Mies and Darrell O’Young— plus newcomer Christer Joens, Audi proved that on this day at least, it had the fastest car and the fastest drivers.

The driving team of Mies, O’Young, and Joens were not perfect—Mies managed to slide backwards into a gravel trap, and it was only luck that a tow truck was able to get the car out before it lost a lap.

That was the only mistake the team made. With a slight edge in top speed and power out of the corners to offset lower fuel economy, the three drivers threaded through traffic on the slippery track, never setting another wheel wrong.

Darrell O’Young drove the final stint, responding to pressure from the pursuing Mercedes by matching his opponent’s lap times, going fast enough to win and slow enough to finish. After the race he told Speed TV that conditions were difficult for all the drivers.

O’Young’s teammmate Christopher Mies daid in a post-race press release, ” At the end, I had tears in my eyes because this victory was the result of an ultra-tough battle in incredibly bad weather against strong rivals.”

Intermittent local showers made things exceptionally treacherous, he said; it could be dry on one stretch of track and a river a few yards down the road. It was a local shower which took out the 2 Audi, he said.

Despite the weather, he was glad he came. “All the guys did so much work—all of Team Phoenix, my two teammates. It’s been an adventurous race. I’m glad we came back and were able to help Audi do a repeat.”

The other Audi, driven by Aussie V8 hero Craig Lowndes, Warren Luff, and Mark Eddy, lasted and often led until the 6:45 mark when Eddy got caught in a sudden shower near McPhillamy Park and hit the wall hard enough to end the day for his team.

Second on the podium was the 20 Erebus Racing Mercedes SLS AMG driven by Jeroen Bleekemolen, Tim Slade, Peter Hackett, and Bret Curtis. The Erebus SLS outperformed the Audis on slicks when the track was damp, but in the dry or on rain tires, didn’t quite have the pace. The team used pit strategy, balancing performance against fuel consumption, to try to get a pit stop ahead of its rivals.

The strategy played out as planned, but didn’t deliver enough of an advantage; Bleekemolen pushed as hard as he dared in the final laps, but the Audi’s speed advantage was too much. He could match, but not beat, his rivals’ lap times.

Despite finishing second, Bleekemolen said he was pleased with his team’s performance and enjoyed the race.

“I hope to be back here,” he told Speed TV. It was great I drove close to the maximum driving time I wanted to do as many laps here as possible. We came pretty close. We’ll be back to try to win it.

“The team did a great job; they prepared the car well; we didn’t have the pace. The Audis were a little bit faster out of the corners and on the straights, in the wet we were almost able to match them but, generally their car was a bit stronger. The balance of performance was in their favor at this race; we will try to catch them at the next one.”

The Clearwater Racing Ferrari, a local team, finished third despite being ill-suited to the conditions. The car worked well in the dry, but was not set up top deal with water running across the track. Nonetheless, the Clearwater team pressed on, finishing two laps down to their much better funded rivals.

Darrel O’Young, Jeroen Bleekemolen, and their teammates came from around the world to race at Bathurst. Because the 6.2-km. Bathurst circuit is so beautiful and so challenging—it literally climbs a mountain, crosses the peak and drops down the other side, presenting difficult ascending and descending twists like Cutting, Dipper, and Falken Elbow, plus frightening flat-out corners like the Chase— the track is gaining a reputation as one of the places to put on a driver’s wish list.

Next: The Other Classes