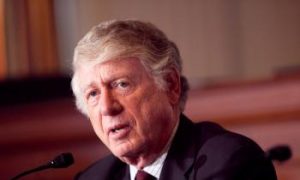 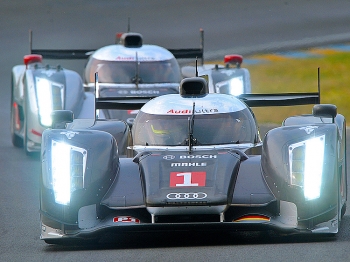 FASTEST: The #1 Audi R18 TDI leads the #3 Audi around the track during the Le Mans Test Day on April 24. (Jean-Francois Monier/AFP/Getty Images)
Motorsports

By James Fish
Print
The margin was tiny, but Audi’s new R18 TDI proved to be the fastest car on the track at the Le Mans Test Day on April 24, with two Audis lapping Le Sarthe circuit faster than their quickest rival, the Peugeot 908.

Top speed and fast laps don’t matter much in testing—or in the race, as Peugeot proved in 2010, when its four cars were the fastest, but all expired, giving Audi the win.

Test Day is about gathering information, finding the best set-ups under varying conditions, and finding any possible weaknesses in the car or crew. Audi and Peugeot both ran almost continuously for eight hours on Sunday, preparing for the race, June 11–12.

“We have prepared a comprehensive test program for all three cars,” Audi Motorsport chief Dr. Wolfgang Ullrich said in a company press release. “We have achieved very good results. I think that we can put that to very good use in the Le Mans race. It was important to do a lot of kilometers here with the all-new car before the race weekend in June comes up.”

Audi is returning to defend its title with three cars and ten drivers—three per car plus an alternate. The new R18 has a much smaller motor (3.7 vs. 5.5 liters), a new six-speed gearbox, and all new aerodynamics. The team must also adjust to the R18’s closed cockpit; this is the first coupe Audi has run since 2003.

“For me it was the first time since 2003 that I’ve sat in a coupe,” said driver Tom Kristensen. “The efficiency and the work of Audi have really impressed me. You can really feel the aerodynamics and the car is very comfortable. As a driver, I very much appreciate the six-speed gearbox. It fits well to the engine with its down-sized cubic capacity.”

According to Romain Dumas, co-driver in the second-fastest #1 Audi, “The car was really easy to drive. Our performance was also very positive. We’ve got to know our new mechanics even better. We’ve also practiced driver changes today. I think that come qualifying day at Le Mans, we will be much better sorted-out than last year.”

Peugeot, still stinging from its total defeat in the 2010 24 Hours of Le Mans, is back in 2011 with a three-car, ten-driver assault on the world’s most prestigious endurance race.

The #7 Peugeot 908 covered 117 laps of the 8.5-mile Le Mans circuit, this was the car designated for the endurance portion of the test.

“Our goal was to work on endurance,” explained driver Nicolas Minassian in a Peugeot press release. “We successfully completed our program. We have now spent a lot of time on the track and everything has gone as planned, which is perfect for recording the data we need for the race. Without particularly adjusting the set-up, we had a very efficient car, which bodes well.”

The #8 Peugeot tested various set-ups and eventually turned in the fastest lap of the three. Driver Anthony Davidson said, “The car is comfortable to drive. We made a few minor adjustments to the set-up but overall we are all very happy with the balance of the Peugeot 908 on this track. It was very positive.”

As it has been in the past, this year again the diesels ruled Le Mans. The fastest gasoline-powered car, a Pescarolo-Judd, was nearly nine seconds off the pace. So one more time, the fight will be between Audi and Peugeot. Audi has the history and the record of endurance, Peugeot is traditionally faster. Maybe this year that will change?