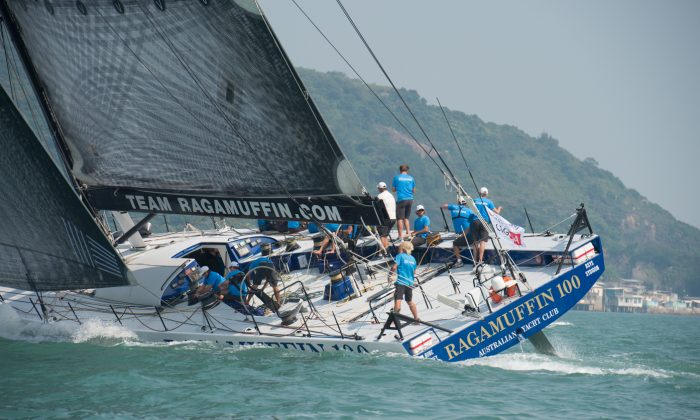 'Ragamuffin 100' on its way out of Victoria Harbour at the start of the Hong Kong to Nha Trang, Vietnam on Thursday Oct 15, 2015. (Bill Cox/Epoch Times)
HK Sports

Also scheduled to race, “ARC 323”, left its mooring for the start line but soon found it had no propulsion from its propeller had to return to quayside and be lifted out of the water for examination. Once out of the water the problem was immediately clear – it had dropped its propeller. A frantic search by divers did not find the missing prop but Frank Pong, owner of “Jelik” came to their rescue and loaned them one of his spare propellers. “RC 323” set off at 4:00pm nearly 3 hours late.

After a day of racing, on Friday afternoon “Arc 323” had caught and passed “Avant Garde” and was tracking “Surfdude”. Ahead of the trailing group which also included “Tipsy Easy” were “EFG Mandrake”, “Zanzibar”, “Ambush”, “Antipodes” and “Black Baza”. Some way in front of these were “Alive” and “Ragamuffin 100” leading the fleet. By this time most boats had changed from a SSW to a SW course heading for the gap between Hainan and the Parcel Islands.

“Ragamuffin 100” however, was already passing the Parcel Islands had again to a more southerly course and over half way to Nha Trang, travelling at 20knots. Most of the other boats were travelling at 13 to 16knots with “Avant Garde” maintaining about 8knots.

Boat positions can be seen by accessing the race Tracking System.