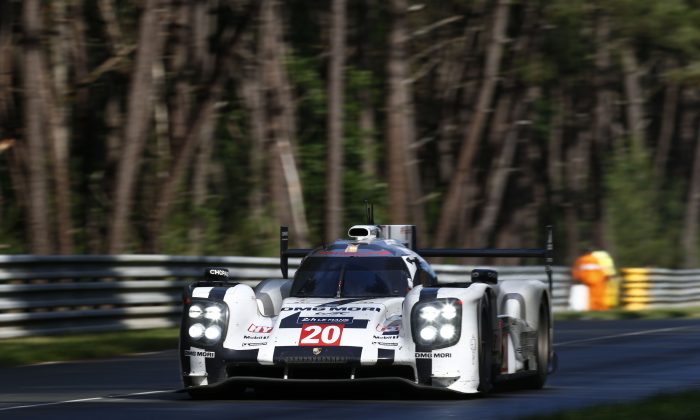 Porsche, back at Le Mans after two decades absence, has taken the lead with five hours left in the 24-hour race after the two leading Audis both experienced turbocharger failure.

Audi’s R18 e-tron quattros #1 and #2 were leading the race with nine hours to go, running like freight trains and looking indestructible. Four hours later the R18s were second and third behind the #20 Porsche 919 Hybrid.

The Porsche had been running a distant third, three laps down, and seemingly too slow to catch the Audis; likely the German manufacturer would have been pleased enough to land on the podium in its first Le Mans 24 of the century.

An hour later the Porsche was second after the turbocharger on the #2 Audi failed, costing a 23-minute pit stop. This left the #1 Audi, the 2013 Le Mans winner and World Champion, solidly in the lead, with nine-time winner “Mr. le Mans,” Tom Kristensen, seemingly on track for his tenth 24-hour ring.

Three hours later, Kristensen was slowing on the track with the same turbo failure as the sister car.

While Tom Kristensen will not likely get his tenth win this year, Audi still has a strong chance at victory. The #1 Audi is four laps down, but the #2 Audi is on the lead lap and chasing hard after the #20 Porsche.

With three hours left in the race, on lap-a 329, the #20 Porsche driven by Timo Bernhard, had a minute’s lead on André Lotterer in the #2 Audi. Bernhard had to pit, and rejoined with a lead of only six seconds—but Lotterer needed to stop on the next lap.

The Audi’s quickest race lap was three seconds faster than the best effort of the Porsche—even after stopping for more fuel, Lotterer should have no problem overtaking the Porsche on the next stint.

On lap 339 the #20 Porsche headed unexpectedly for the pits—apparently Timo Bernhard radioed in saying he had a slow puncture and needed top pit early.

André Lotterer in the #2 Audi took the race lead on lap 340; the Audi driver was on his fourth stint and is tires, their second. At 12:53 p.m. on lap 343 Lotterer pitted for fuel only, pushing himself for a fifth stint and his tires for a third. By staying out, he kept the lead, giving him more time to stretch the gap over Webber before handing off to

Benoît Tréluyer who would finish the race for Audi.

After the #97 Aston Martin lost time with a broken power-steering system—possibly damaged by the force with which the Aston drivers slammed over curbs in an effort to take the class lead—the pole-sitting #51 AF Corse Ferrari 458 inherited the lead in the GTE-Pro class, and has two laps on the next car in class, the #92 Manthey Porsche 911 RSR.

The #73 Corvette, despite having early mechanical issues, was less than a minute behind by Porsche with two-and-half hours to go, and pushing hard to take second.

After holding a stable lead for many hours, the #35 Oak Racing Ligier-HPD, driven now by Alex Brundle, is down a cylinder and struggling to hold off the #46 Thireit/TDS Ligier-Nissan of Tristan Gommendy, two minutes behind but running strongly. Ten seconds or so behind the #46 is the #38 Jota Sport Zytek-Nissan driven by Harry Tincknell.

The Oak could hold on, but it seems unlikely; two-plus hours is too long to run on seven cylinders. The Jota and Thiriet cars are very closely matched.