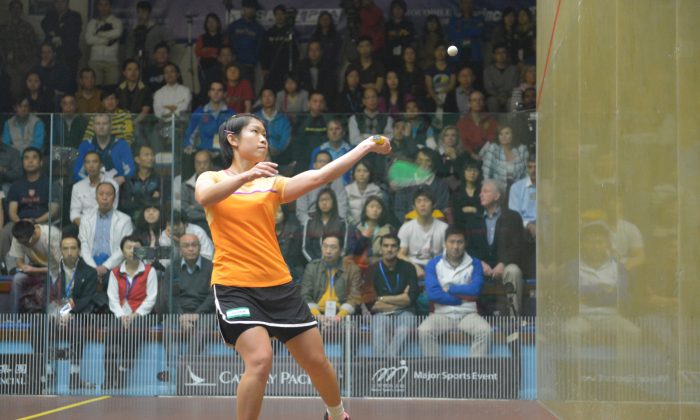 Annie Au (seen here during the 2012 Hong Kong Open) is the first Chinese women to win the Asia Individual Championship, held in Islamabad, Pakistan, between May 1 and May 5, 2013. She beat Lo Wee Wern in four sets to lift the trophy. (Bill Cox/The Epoch Times)
International

Annie Au of Hong Kong has become the first Chinese player to win the Asia Individual Squash Championship. The tournament – that took place in Islamabad, Pakistan, from May 1 to May 5 – was the 17th in the series of this bi-annual event.

Ranked at 13 in the world, Au (seeded 2) had a bye in the first round, beat Riffat Khan of Pakistan in three sets in the second round and Zulhijjan Azan of Malaysia (8) in the Quarter Finals, again in straight sets.

The reigning champion and World No. 1, Nicol David had won the title on the previous eight consecutive occasions. David did not take part in the competition this year.

Hong Kong No. 2 Joey Chan was also in the prizes, finishing third in the competition.

Khan, ranked six in the tournament, beat Abdullah Al Muzayan of Kuwait 11/9, 11/3, 11/8 in the Final to take the men’s individual title for Pakistan.

He defeated the reigning champion Nafizwan Adnan in the Quarter Final, much to the delight of the local fans. But there was controversy at the start of the Quarter Final when Nafizwan refused to go on court because a relation of Khan was included as an umpire. Although he was replaced, it gave an uncomfortable feeling to the start of the match. But Khan was not upset and proceeded to play some excellent squash to win the match.

He is the first Pakistani player to win the title since Zarak Jahan Khan won in 1998. He conceded in interview after the match that he used his knowledge of the court and the support of the crowd to maximum advantage.

“I am sure that after this victory, squash in Pakistan will see better days,” he said.

Hong Kong’s men’s No. 1 Max Lee, the number 2 seed, was knocked out in the Quarter Final by Malaysian Muhammad Asyraf Azran in a close four setter lasting 63 minutes.