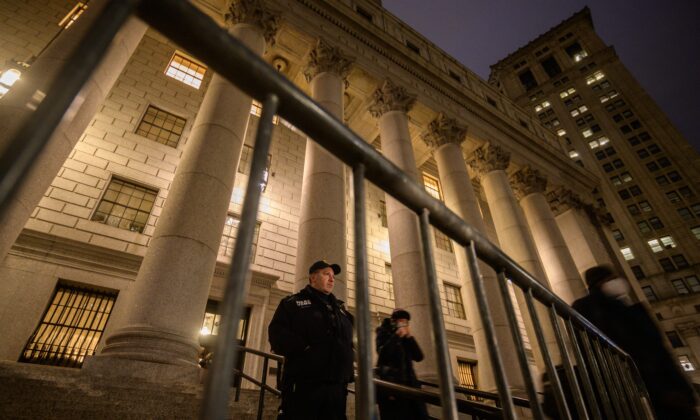 The courthouse in lower Manhattan where a jury is deliberating the verdict in the sex crimes trial of Ghislaine Maxwell in New York on Dec. 27, 2021. (Ed Jones/AFP via Getty Images)
Judiciary

Attorneys Continue to Joust in Maxwell Case Days Before Sentencing

On June 21, Judge Alison Nathan instructed the prosecution that, in accordance with the Crime Victims’ Rights Act, anyone who wants to speak at the sentencing must contact the Victim Witness Unit by June 23.

The deadline has been met.

The prosecution filed paperwork with the court on June 22 stating it had notified six alleged victims, all of whom testified at the trial, of their right to be heard at the sentencing.

Of the six, “Kate” and Annie Farmer intend to speak on Tuesday.

Earlier, Robert Y. Lewis, an attorney with Marsh Law Firm, wrote to Nathan on June 14, notifying her that alleged victim Elizabeth Stein has also expressed desire to address the court.

On June 22, attorney Sigrid S. McCawley of Boies Schiller Flexner submitted the contents of seven impact statements from alleged victims for review by the court.

Many pages of the document were redacted in full from the public, leaving only five accessible.

Nathan has received two letters drawing his attention to some of the inaccessible documents regarding alleged victim Virginia Giuffre and her request to make a statement at the sentencing.

The first letter, from attorney Bruce A. Green, states that Giuffre has a “serious lack of credibility with respect to the Epstein-Maxwell matter,” citing a recent deposition she gave in a pending civil case with Harvard Law School Professor Alan Dershowitz.

The second letter is from the law offices of Aidala, Bertuna & Kamins, which represents Dershowitz in the case. It notified the court that their request to have the transcript of the deposition unsealed was denied by the case’s judge. They are encouraging the Maxwell court to have it unsealed for review, before allowing Giuffre to speak.

Maxwell’s defense team has objected to the seven impact statements to be read at the sentencing.

For eight pages in a June 24 document, they lay out their argument, which is essentially that those looking to speak do not qualify as victims according to the Crime Victims’ Rights Act.

They also go on to say, “Ms. Maxwell’s due process rights must be safeguarded” and “the sentencing proceeding should not be a bully pulpit for anyone who claims abuse.”

Maxwell was found guilty of five of six counts of sex trafficking in connection with Jeffrey Epstein on Dec. 29, 2021, after a month-long trial in federal court in New York.