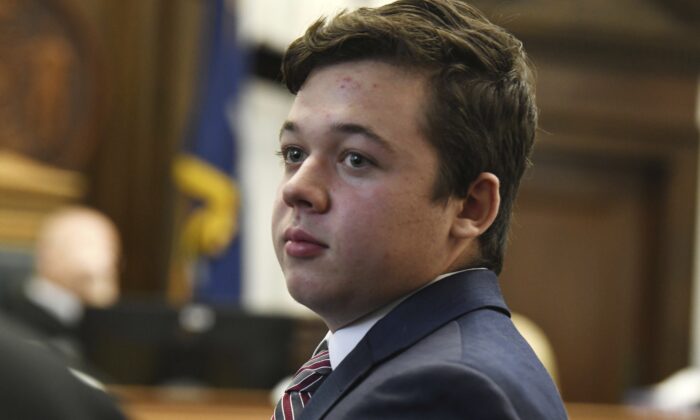 MADISON, Wis.—A judge was hearing arguments Monday over whether use-of-force experts can testify at Kyle Rittenhouse’s trial for shooting three people during a protest against police brutality in Wisconsin last year.

The hearing is likely the last before Rittenhouse goes on trial Nov. 1 for the shootings during chaotic demonstrations in Kenosha on Aug. 25, 2020, two days after a police officer in that city shot a Jacob Blake in the back while responding to a domestic disturbance.

Rittenhouse, 18, of Antioch, Illinois, was among a number of people who responded to calls on social media to take up arms and come to Kenosha to respond to the protests. Rittenhouse is charged with homicide and other crimes in the fatal shootings of Joseph Rosenbaum and Anthony Huber and the wounding of Gaige Grosskreutz.

Rittenhouse’s attorneys are seeking testimony from use-of-force expert John Black to bolster their case that Rittenhouse acted in self-defense. Prosecutors have asked Judge Bruce Schroeder to disqualify Black, arguing that his expertise is in police, not civilian, use of force and is not relevant to Rittenhouse’s actions.

Black previewed his testimony at a hearing in early October. Monday’s hearing will include testimony from Robert Willis, a use-of-force expert whom Assistant District Attorney Thomas Binger has said he will use if Black is allowed to testify.

Binger argued Monday that the jury doesn’t need testimony from use-of-force experts on either side to decide whether Rittenhouse’s actions on Aug. 25 were reasonable. Jurors can watch video from that night, hear from witnesses and attorneys and “draw their own conclusions,” Binger said.

Rittenhouse attorney Mark Richards pushed back, arguing that the experts could aid in the jurors’ understanding. And he said there likely would be several points of contention over what video shows.

Other motions remain for Schroeder to decide before trial. One, from prosecutors, asks Schroeder to forbid defense attorneys from describing the three men Rittenhouse shot as rioters, looters, or arsonists. Binger argues there’s no proof any of the three were engaged in such activities the night they were shot.

They are also seeking to stop the defense from introducing any evidence that police offered water to Rittenhouse and other armed citizens, or that they said, “We appreciate you guys, we really do,” to them. They also want to block testimony about one officer’s innocuous interactions with Rittenhouse that night.

Binger argued Monday that the defense wants to put police, rather than Rittenhouse, on trial by suggesting they had “some sort of implicit or express approval” of Rittenhouse’s actions that night.

“This is a case about what the defendant did that night,” he said.

Corey Chirafisi, another attorney for Rittenhouse, argued that prosecutors had charged Rittenhouse with acting recklessly, making his interactions with police relevant in deciding whether his behavior was reckless.

Many conservatives have flocked to support Rittenhouse, calling him a patriot and making him a symbol for gun rights and raising $2 million for his bail. Others, including some liberals and activists, portray him as a domestic terrorist and say he made a volatile situation worse.