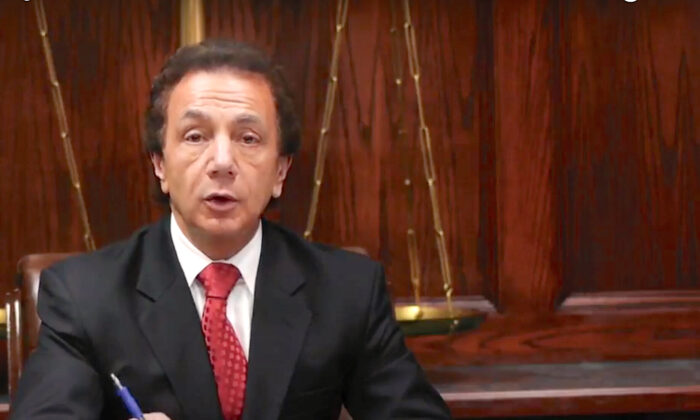 Attorney on Ohio Ivermectin Case: Why You Don’t Have the Right to Try?

Attorney Ralph Lorigo says people who got COVID-19 should have the right to try alternative treatments such as ivermectin, responding to the recent decision of an Ohio judge who refused to force a hospital to administer ivermectin to a ventilated COVID-19 patient.

Lorigo is one of the attorneys of plaintiff Julie Smith, who sued West Chester Hospital on Aug. 20 for declining to administer ivermectin to her husband after offering to release the hospital of “any and all” responsibility and getting an ivermectin prescription from a doctor.

On Monday, Butler County Common Pleas Judge Michael Oster reversed a decision made by another judge, Gregory Howard, two weeks ago, ruling that the plaintiff could not meet the burden to be entitled to a preliminary injunction because the medical and scientific communities do not support the use of ivermectin as a treatment for COVID-19.

“His vent settings were 80-100 until he got the ivermectin, and then they dropped,” Lorigo said, noting the ventilator settings are now in a range of 50-60 percent. Lorigo also pointed out that before the hospital was ordered to administer ivermectin, it had exhausted its COVID-19 protocols.

However, Lorigo said he would not advise his client to appeal because it would take too long to get a verdict.

“The ivermectin has done enough good. Thirteen days worth of Ivermectin is a very good supply,” Lorigo told The Epoch Times. “We’re hopeful that that should turn the tide.”

Lorigo said he had a similar case in Illinois, and it took 18 or 20 days to get a patient off a ventilator.

Lorigo won that case and other cases to force hospitals to treat COVID-19 patients with ivermectin. All patients in those cases recovered from the disease caused by the CCP (Chinese Communist Party) virus.

In his Monday ruling (pdf), Oster expressed sympathy to the Smiths, but insisted that public policy “should not and does not support allowing a physician to try ‘any’ type of treatment on human beings.”

“A clinical trial would be one such method of a development process,” Oster wrote in his order. “ However, a clinical trial is not at issue in this case.”

Oster also noted that “the right to try” is not raised in the case.

Lorigo told The Epoch Times that many people have recently been seeking his help. He receives 50-100 emails a day asking him to help sue hospitals to force them to administer ivermectin to their relatives or friends infected with COVID-19.

“People are emailing me in desperation,” Lorigo said. “They’re crying on the phone. The same situation over and over again: a loved one has gone to the hospital with COVID and ended up placed on a ventilator. And the protocol is over with and the person is dying.”

“Why do you have to get a lawyer to improve your own health, to get what you’re entitled to … That’s crazy. That’s not what this country is supposed to be about,” Lorigo said.

Ivermectin is a drug that has been approved by the Food and Drug Administration (FDA) to treat certain infections caused by internal and external parasites. Two scientists were awarded the Nobel Prize in 2015 for discovering ivermectin, given the drug’s success at improving the health and wellbeing of millions of individuals infected with river parasites in the world’s poorest regions.

The Centers for Disease Control and Prevention (CDC) and FDA recently reiterated their opposition to the use of ivermectin for COVID-19 treatment, saying the FDA hasn’t approved it for that use.