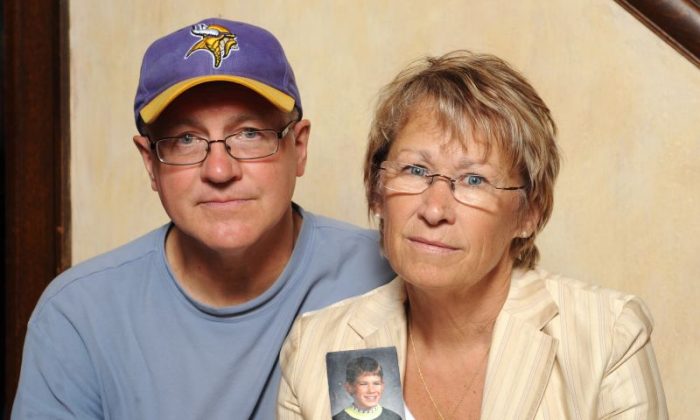 In this Aug. 28, 2009, file photo, Patty and Jerry Wetterling show a photo of their son Jacob Wetterling, who was abducted in October of 1989 (AP Photo/Craig Lassig, File)
Crime and Incidents

The Minnesota man who confessed to kidnapping, sexually assaulting and killing 11-year-old Jacob Wetterling has shed “countless tears” for Jacob and his family in the 27 years since his death, his lawyer says in a court filing.

Danny Heinrich will be sentenced in federal court Monday on a child pornography charge that stemmed from the investigation into Jacob’s disappearance. As part of his plea deal, Heinrich confessed to killing the St. Joseph boy, and prosecutors agreed not to charge him with murder. The plea deal calls for a 20-year sentence, the statutory maximum for the count.

In a sentencing memo filed Thursday, defense attorney Reynaldo Aligada says nobody should feel sympathy for Heinrich, who can do or say nothing to lessen “the immeasurable pain” that he caused the Wetterling family.

“Recognizing that there is nothing he can say or do to change the pain and anguish he has caused, Danny Heinrich is still hopeful that on November 21, 2016, he can somehow convey how sorry he feels for the terrible crimes that he has committed,” Aligada wrote.

Prosecutors said no sentence can ever truly reflect the “cruel, sadistic and narcissistic” character of Heinrich, but 20 years is the maximum allowed by law.

Heinrich’s “conscious choice to kill this child reveals him to be a predator who placed self-preservation and his own criminal sexual desires over the innocence and life of a young boy who never had the chance to grow to be a man,” they wrote.