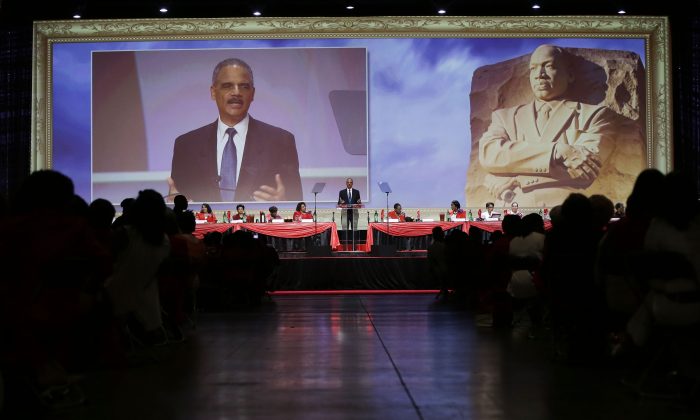 Attorney General to Speak to NAACP

U.S. Attorney General Eric Holder will speak at the NAACP’s annual convention today amid the group’s cry for civil charges to be pressed against George Zimmerman in the Trayvon Martin killing case.

The Department of Justice hasn’t decided whether to charge Zimmerman after he was acquitted of murder charges on Saturday. Groups across the nation are calling for the charges, including the NAACP, which the night of the acquittal began circulating a petition calling for criminal civil-rights charges.

Holder told a crowd in Washington, DC yesterday that the investigation will continue in “a manner that is consistent with the facts and the law,” while calling the killing of Martin “tragic” and “unnecessary.” But charges would be hard in this case, according to experts Bloomberg spoke to.

Samuel Bagenstos, the former No. 2 official in the Justice Department’s civil-rights division under Holder, said that it would be difficult to prove that Zimmerman was motivated by race when shooting Martin, in the scuffle that happened last year in a Florida neighborhood.

“To prove what’s on somebody’s mind is always difficult,” Bagenstos, now a law professor at the University of Michigan. “To prove what’s on somebody’s mind in a fight that took place between two people, one of whom is dead, the other of whom doesn’t have to testify and with no other witnesses around to hear what he has to say, is very, very difficult.”