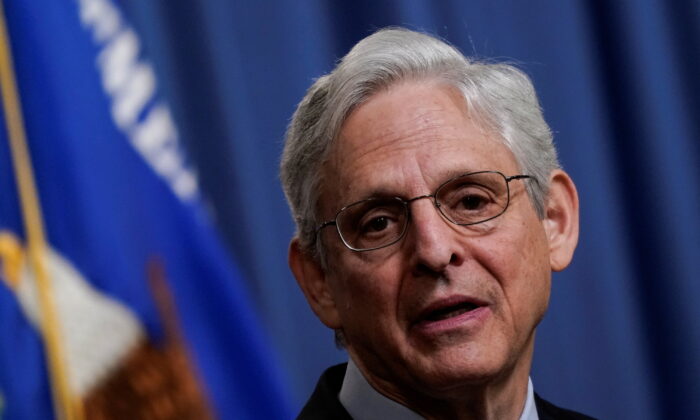 Attorney General Merrick Garland told lawmakers “there will not be interference,” but declined to say whether he has been briefed on the federal tax investigation into Hunter Biden by the U.S. attorney’s office in Delaware.

Garland was questioned about the federal investigation into Biden by Sens. Bill Hagerty (R-Tenn.) and Mike Braun (R-Ind.) at an April 26 Senate Committee on Appropriations hearing.

“As I said during my nomination hearing, the investigation is being run by and supervised by the U.S. Attorney for the District of Delaware. He [David Weiss] is supervising the investigation, and I’m not at liberty to talk about internal DOJ deliberations—but he is in charge of that investigation, and there will not be interference of any political or improper kind,” Garland said, also declining to comment on whether other senior DOJ officials have been briefed.

The senator asked Garland whether U.S. President Joe Biden had told him his son is innocent.

“Absolutely not,” Garland responded. “He has not done that, and he has committed to not interfere in the investigation.”

Hagerty pressed further, asking Garland how the public could be confident there won’t be political interference in the investigation.

“Because we put a Trump appointee in charge of the investigation,” Garland said, referring to Weiss. “And because you have me as attorney general, who’s committed to the independence of the DOJ from any influence from the White House.”

Hagerty then asked Garland whether the DOJ was considering assigning a special counsel to investigate Hunter Biden. Garland again declined to comment.

When asked under what circumstances a special counsel would be used in the investigation, Garland said, “it depends on the circumstances.”

“The question is an internal DOJ matter,” Garland repeated. “I don’t want to make judgments, but I’m comfortable with the Attorney from Delaware continuing.”

The federal investigation into Hunter Biden’s finances was revealed in December 2020, and few updates have been provided since then.

Attorney Clint Lancaster, who represented an Arkansas woman who filed the lawsuit in 2019 alleging that Hunter Biden was the father of her daughter Navy Joan Roberts, told CBS News earlier this month that federal prosecutors subpoenaed the documents from his case.

“They wanted every record relating to Hunter Biden we had,” he said of the paternity case, which was settled in 2020.

Additionally, he said the tax records he and Roberts provided overlapped during the same time period as Hunter Biden’s foreign business activities.