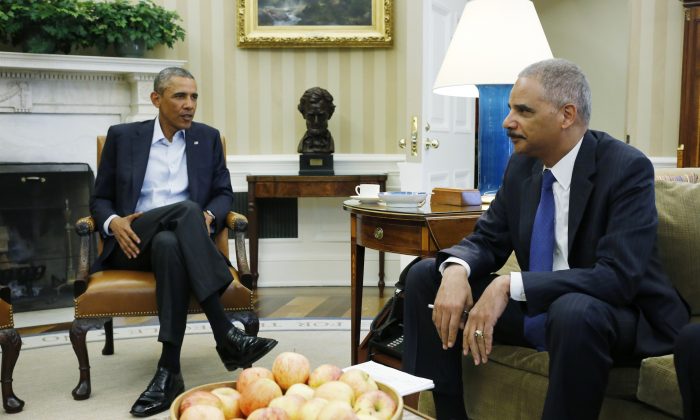 President Barack Obama meets with Attorney General Eric Holder regarding the fatal police shooting of Michael Brown in the Oval Office at the White House in Washington Aug. 18. (AP Photo/Charles Dharapak, File)
US

Attorney General Eric Holder’s eyes were moist as he said of the president, “I am proud to call you my friend.” Both men broke ground in American politics, as the first African-Americans to fill their positions. Obama announced Holder’s long-rumored resignation Thursday. After Obama described Holder’s public service and thanked him, the audience gave a lengthy standing ovation.

Holder, 63, a former judge and prosecutor, plans to stay in office until Obama names a successor for him. “I come to this moment with very mixed emotions,” he said.

The president praised Holder’s commitment to the rule of law and justice, which he said, “is about whether you feel safe in your skin.” He seemed to allude to the recent death of Michael Brown in Ferguson, Mo.

Holder took an unprecedented trip to the small city after Brown’s death, to reassure residents that the federal government took their concerns seriously, he said at the time.

He started a federal investigation, not of the police shooting of Brown, but of systemic troubles in local law enforcement and courts.

“We would not be well served as a nation to have this drag out,” Holder said of the investigation. “There’s a great deal of anticipation, and I’d say apprehension, on the part of the people in Ferguson, and many people in this nation, about how this is going to be resolved.”

The Rev. Al Sharpton urged the White House to meet with civil rights representatives before appointing a replacement. “There has not been an attorney general with a civil rights record equal to Attorney General Eric Holder,” Sharpton said.

Holder had made civil rights a priority toward the end of his tenure, saying the issue was personal for him. He said he had worked to protect Americans’ “most sacred right, the right to vote.”

It was minutes after the announcement that conservative Project 21 co-chairman Horace Cooper, who is black, said in a statement that he welcomed Holder’s departure. “As the nation’s first black head of the Justice Department, Eric Holder managed to set back race relations, showed disrespect for the rule of law and undermined basic constitutional principles.” He referred to multiple initiatives Holder led at the Department of Justice.

Cooper regarded Holder’s efforts to counteract what the Democrats call voter suppression, and Republicans call measures for voting integrity or fairness, as a partisan pursuit. He wrote, “Hopefully, his replacement will understand the difference between being the chief legal adviser for the implementation of a partisan agenda and being the chief law enforcement officer of the United States.”

Holder experienced many challenges during his six-year tenure. In his first few years on the job, Holder endured a succession of controversies over, among other things, an ultimately abandoned plan to try terrorism suspects in New York City, a botched gun-running probe along the Southwest border known as Fast and Furious, and what was seen as failure to hold banks accountable for the economic near-meltdown.

After failing to satisfy requests by the House of Representatives for documents relating to the Fast and Furious scandal, Holder became the first attorney general to be held in contempt by Congress.

But he stayed on after Obama won re-election. He pushed for changes to a criminal justice system that he said meted out punishment disproportionately to minorities.

Stung by criticism that the department hadn’t been aggressive enough in targeting financial misconduct, Holder in the past year and a half secured criminal guilty pleas from two foreign banks and multibillion-dollar civil settlements with American banks arising from the sale of toxic mortgage-backed securities.

Even then, critics noted that no individuals were held accountable. Critics have also objected to the deals on other grounds. Bank of America, for instance, was fined $17 billion mostly for loans previously issued by Countryside Financial and Merrill Lynch, institutions the federal government had asked Bank of America to acquire during the 2008 crisis. Some of the proceeds from the settlements were then used by Holder to fund nonprofit groups that support the Democratic Party.

Most recently, Holder has come under fire for a lack of results in the investigation of whether the IRS broke laws in its treatment of conservative groups. Those groups have charged that the IRS targeted them for special scrutiny and denied them tax exempt status without cause.

White House officials said Obama had not made a final decision on a replacement for Holder, who was one of the most progressive voices in his Cabinet. A Justice Department official said Holder finalized his plans in a meeting with the president over the Labor Day weekend.

White House press secretary Josh Earnest said Obama’s team has already been thinking through candidates and naming one would be a high priority for the president.

“The president accepted his decision without putting up much of a fight simply because it’s clear to anybody who’s been paying attention that Gen. Holder has confronted a large number of issues, many of them very complicated, some of them even controversial, over the course of the last five and a half years,” Earnest said. “So he has certainly put in his time in a way that he can be proud of and a way that the country is appreciative of.”

Massachusetts Gov. Deval Patrick, sometimes mentioned as a possible Holder successor, took himself out of consideration. “That’s an enormously important job, but it’s not one for me right now,” Patrick said.

White House press secretary Josh Earnest said Obama’s team has already been thinking through candidates and naming one would be a high priority for the president.

Obama said the Holder family would now be better able to practice the pursuit of happiness. Holder’s eyes moistened again as he thanked his wife, who he said makes everything possible for him, and is the center of his world. “You are my life partner. I love you,” he said.