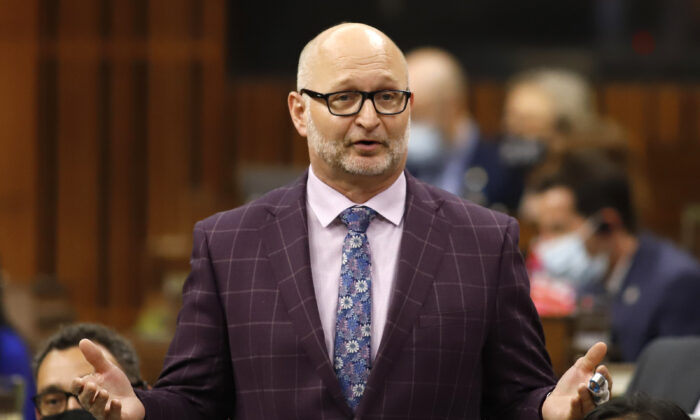 Minister of Justice and Attorney General of Canada David Lametti rises during Question Period in the House of Commons on Parliament Hill in Ottawa on May 16, 2022. (Patrick Doyle/The Canadian Press)
Canada

Attorney General David Lametti said the Emergencies Act needed to be invoked in part over concerns that Freedom Convoy protesters would blockade railroads, according to briefing notes.

“Threats were made to block railway lines which would result in significant disruptions,” wrote Department of Justice staff in an April 23 briefing note for Lametti, obtained by Blacklock’s Reporter.

“The result of a railway blockade would be significant. Canada’s freight rail industry transports more than $310 billion worth of goods each year on a network that runs from coast to coast,” the note said.

Freedom Convoy protesters did not blockade railways during cross-country demonstrations against COVID-19 mandates and restrictions earlier this year.

The federal government invoked the Emergencies Act on Feb. 14 in response to the Freedom Convoy protests in Ottawa and at some Canada-U.S. border crossings. The act was revoked just nine days later on Feb. 23.

The federal government did not invoke the Emergencies Act in February 2020 when supporters of the Wet’suwet’en First Nation in B.C. protested the construction of the Coastal GasLink Pipeline by blockading a number of Canadian railroads over the course of several months.

In mid-February 2020, Canadian Manufacturers and Exporters CEO Dennis Darby estimated that $425 million in goods was being stalled in railway transportation for every day that the blockades continued.

The Parliamentary Budget Officer (PBO) said that the blockades reduced Canada’s 2020 first-quarter GDP by $283 million and forced companies to lay off over 1,000 employees, as laid out in the report “Estimate Of The Impacts Of The February 2020 Rail Disruption.”

During the protests, Prime Minister Justin Trudeau said that “every attempt at dialogue has been made but discussions have not been productive,” and added that “we cannot have dialogue when only one party is coming to the table.”

Other Department of Justice briefing notes relating to the Freedom Convoy obtained by Blacklock’s show that Lametti’s office also cited terrorist attacks stemming from the Ottawa protests as a concern, while staff acknowledged there was no evidence to support the concerns.

“Two bomb threats were made to Vancouver hospitals and numerous suspicious packages containing rhetoric that references the hanging of politicians and potentially noxious substances were sent to offices of Members of Parliament in Nova Scotia,” said one note, before adding that “a link to the convoy has not yet been established in either case.”

“Violent online rhetoric, increased threats against public officials and the physical presence of ideological extremists at protests also indicate there is a risk of serious violence and the potential for lone actor attackers to conduct terrorism attacks,” it said.

Out of 230 Freedom Convoy arrests, none were charged on counts of terrorism, according to Blacklock’s.

Noé Chartier and Omid Ghoreishi contributed to this report.