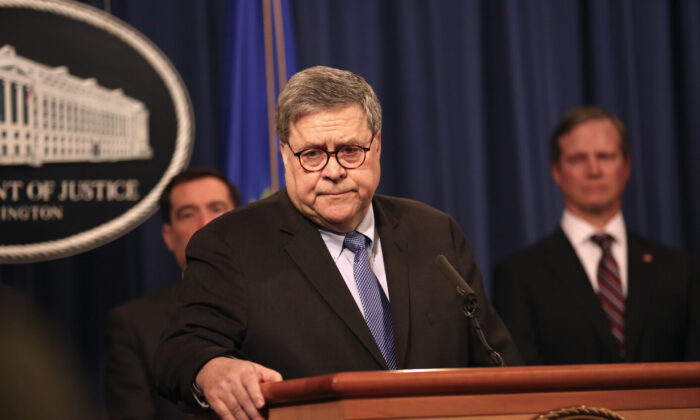 Federal authorities said that the shooting by a Saudi military trainee at a U.S. naval base who killed three people was an “act of terrorism” motivated by jihadist ideology.

Attorney General William Barr and other senior law enforcement officials announced findings of a criminal investigation on Monday about a month after the Dec. 6 shootings at Pensacola Naval Air Station in Florida, which killed three U.S. sailors and wounded eight other Americans.

The gunman, Royal Saudi Air Force 2nd Lt. Mohammed Alshamrani, 21, open-fired at the naval base in an attack that lasted for about 15 minutes before he was fatally shot by police. Alshamrani was a flight student at Pensacola, where members of foreign militaries are routinely trained by the United States.

Federal officials said investigators found evidence that Alshamrani was motivated by jihadist ideology, including a social media message posted on Sept. 11 last year, stating, “The countdown has begun,” and other anti-American, anti-Israel, and jihadi messages on social media, as recent as two hours before his attack. Alshamrani also visited the 911 Memorial in New York City during the Thanksgiving weekend.

Bowdich said that during the attack Alshamrani shot at pictures of President Donald Trump “and a former U.S. president,” adding that a witness at the scene recounted that he made statements criticizing American military actions overseas.

During the probe, investigators found a glock 9mm handgun with an extended magazine along with several ammunition magazines and approximately 180 rounds of ammunition at the crime scene, federal authorities said. Authorities previously said Alshamrani had lawfully purchased the firearm under a state hunting license exception, which allowed non-immigrants to purchase firearms and ammunition with a valid hunting license.

The officials also disputed early reports that indicated the shooter had arrived at the naval base with other Saudi cadets who took videos during the attack.

The attorney general said Alshamrani arrived at the base by himself and that the other Saudi cadets only began filming the resulting commotion around the building after the attack had begun. He added those cadets fully cooperated with investigators during the probe.

Barr added that during the course of the investigation, they found 21 members of the Saudi military training in the United States who were in possession of derogatory material, including jihadist or anti-American content, or had contact with child pornography on social media. The U.S. Attorney’s Office has independently reviewed the 21 cases and determined that none of them would in the normal course result in federal prosecution.

The Kingdom of Saudi Arabia, he said, had determined that the possession of such material was “unbecoming an officer in the Royal Saudi Air Force and in the Royal Navy” and has unenrolled the 21 Saudi military trainees from their training curriculum in the United States. They will also be returning to Saudi Arabia later on Monday.

“The Kingdom has assured me that it will review each of these cases under their Code of Military Justice and their criminal code,” Barr said.

Barr also said that investigators are still trying to unlock two of Alshamrani’s iPhones, both of which are damaged, in an effort to figure out who the shooter had been communicating with prior to the attack. He added that investigators have asked Apple for help in unlocking the devices but added the company has not provided “any substantive assistance.”

The attorney general also singled out several U.S. servicemen for their courage during the attack, including Navy Airman Ryan Blackwell who managed to jump on top of a fellow sailor to keep her from being shot and, despite being shot five times, proceeded to assist other students to escape.

Federal authorities also said that there is currently no evidence of any co-conspirators in the United States, but they are still investigating to determine whether there are any in Saudi Arabia.

The Pensacola shooting raised many questions about how well foreign students are screened before they participate in military training in the United States. In response to the incident, the Pentagon ordered a broad review of the screening procedures, according to a memo on Dec. 10.

The memo, which was signed by Deputy Defense Secretary David Norquist, also suspended flight and other operational training for all Saudi Arabian students in U.S. military programs.

Defense Secretary Mark Esper confirmed on CBS’s “Face the Nation” on Sunday that the department was taking steps to strengthen the screening process.

The United States has long had a robust training program for the Saudi military, providing assistance at home and in the kingdom. There are currently about 850 Saudis participating U.S. military training programs, according to the Pentagon.

For the most part, military installation commanders have the authority to set their own security procedures, including base entry screenings and carry permits for guns. There is a baseline level of security that must be met, but commanders can make any of their procedures more stringent if they believe it’s necessary.