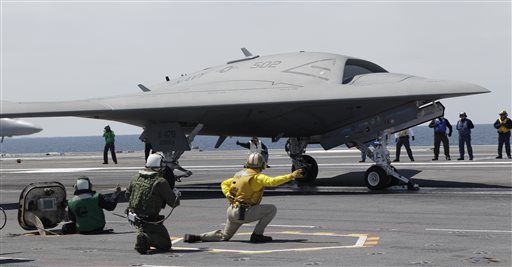 A Navy X-47B drone is launched off the nuclear powered aircraft carrier USS George H. W. Bush off the coast of Virginia. Attorney General Eric Holder said the United States considers drone strikes a viable option to target United States citizens outside the country who pose a threat to the U.S. and cannot feasibly be captured. (AP Photo/Steve Helber)
US

The attorney general said that in conducting U.S. counterterrorism operations against al-Qaida and its associated forces, the government has targeted and killed one American citizen, Anwar al-Awlaki.

In a letter to Senate Judiciary Committee Chairman Patrick Leahy and other senators, Holder says the U.S. is also aware of three other American citizens who have been killed in such counterterrorism operations over the same time period.

While al-Awlaki was specifically targeted by the U.S., the three other Americans were not.

Holder said that “it is clear and logical that United States citizenship along does not make such individuals immune from being targeted,” if they commit acts of violence against their own country from abroad. If the United States has carefully reviewed the circumstances and decided that the person poses an imminent threat and capture is not feasible, then a drone strike will be considered and likely carried out.

Al-Awlaki was a senior operational leader in al-Qa’ida, and “attempted to conduct terrorist attacks against the U.S. homeland,” according to Holder, and it was determined not feasible to capture him.

Holder said that President Barack Obama will soon speak publicly in greater detail about the government’s counterterrorism operations. Obama is scheduled to speak at the National Defense University on May 23.

A White House official said that Obama will discuss the legality of his administration’s secret drone program and other counterterrorism practices during the speech.