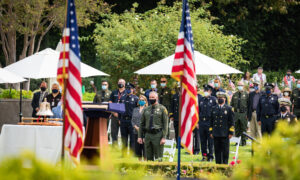 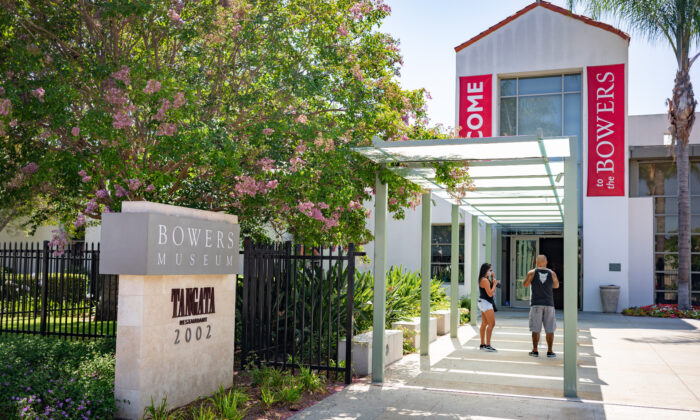 Museums in Orange County, California, say they are encouraged by attendance as visitors have returned to their exhibits after months of mandatory shutdowns.

Officials at the Bowers Museum in Santa Ana—the largest museum in the county—told The Epoch Times that attendance ramped up very quickly after the cultural art museum’s Sept. 12 reopening, with the line of visitors often winding out the door and down the block.

“Our numbers have steadily grown in the two weeks since we reopened,” Kelly Bishop, the museum’s director of communications and branding, told The Epoch Times.

Orange County moved up to the red tier on the state’s COVID-19 monitoring list on Sept. 8, allowing museums to reopen at 25 percent capacity. Except for a brief two-week reopening at the end of June, all county museums had been mandated to remain shuttered since March 13.

Prior to the pandemic and its mandated closing, the Bowers Museum was in the midst of holding one of its most popular exhibits, “Inside the Walt Disney Archives: 50 Years of Preserving the Magic.” The 10,000-square-foot showcase displays rare Disney items in honor of the company’s 50th anniversary.

“We’re currently running at reduced capacity and averaging 150 people per weekday, and 300 per day on weekends,” Bishop said via email.

She said the museum would “continue to adhere to our state and local guidelines” as the reopening progresses.

“We wouldn’t dare guess at a timeline for when things will be back to ‘normal,’ though we remain hopeful that we’ll be able to move to the next tier soon (50 percent capacity), with Orange County numbers trending as they are,” Bishop said.

The increased attendance comes as a welcome relief after the strain put on the organization by the COVID-19 pandemic.

“Bowers has been losing about a quarter million dollars a month since the pandemic forced us to close,” Bishop said.

“We did receive a Paycheck Protection Program (PPP) loan for $610,000, which has helped significantly to retain full time staff who worked from home,” she said. But she added that “even that team took a pay cut” of 20 percent to 30 percent for a while.

“Now that we’re open and attendance is building, we’re slowly bringing back our part-time staff that was lost during closure,” Bishop said.

Due to its popularity and high demand for an extension, the Walt Disney Archives exhibit will be showcased at Bowers until February 28, 2021, according to a press release sent to The Epoch Times by the museum.

“I think this is in large part due to folks sharing online and on social media about how safe they felt during their visit. The safety of our visitors and staff remains our number one priority and we’ve gone to great lengths above and beyond what’s expected to ensure a safe environment,” said Bishop.

The museum is also presenting nine other permanent exhibitions, including a brand new installation of the museum’s collection of Miao silver jewelry and textiles.

The Orange County Museum of Art

The Orange County Museum of Art (OCMA) also reopened its doors on Sept. 12.

Sarah Jesse, the museum’s interim director and CEO, told The Epoch Times that so far, OCMA’s reopening “has been very positive.”

“During quarantine we installed 5 terrific new shows,” she said via email. “Visitors are excited to see the new work, and it’s been a joy to be able to provide a safe, culturally-rich experience for the community post-quarantine.”

The museum is temporarily exhibiting its works at the OCMA Expand facility, while the museum’s new 52,000-square-foot building is being constructed.

OCMA live-streamed a “virtual topping out ceremony” on Oct. 6 that showcased the placement of the final structural beam for the new building, which is scheduled to open next year.

“Like all cultural institutions, we’ve felt the financial strain of COVID, but we’ve been fortunate to receive grants and COVID aid to sustain us,” Jesse said.

She added that the prolonged closure has also resulted in a “positive impact” by increasing the museum’s exposure to unexpected audiences.

“I’ve been pretty astounded at the reception to our virtual programs. Since April, we’ve served over 8,000 people through these new offerings, so despite having fewer resources, we managed to grow our impact,” she said.

“So much of our emphasis prior to COVID was on facilitating direct encounters with original works of art in the galleries, but suddenly we found we were engaging new audiences—including people with disabilities, older adults, and busy caregivers—simply by meeting people where they live, including other countries.”

“Needless to say, we will continue utilizing our new digital tools moving forward, but really do love seeing visitors in real life again and look forward to operating at full capacity when it is safe to do so,” she said.

The Laguna Art Museum and the Children’s Museum at La Habra have also reopened since the restrictions were lifted in the county, though the organizations did not respond to The Epoch Times’ requests for attendance figures for the museums.

The Laguna Art Museum will debut a new exhibit of black-and-white coastline photographs on Oct. 11 entitled “Our Ocean’s Edge.” The museum, located in Laguna Beach, specializes in California art and is open from 11 a.m. to 5 p.m. every day of the week except Wednesday.

The Children’s Museum at La Habra is located in a historic 1923 train depot and offers a “hands-on environment” that includes arts, sciences, and cultural exhibits from around the world. The museum caters to families with children up to 8 years old, according to its website.

All museums that have reopened are following strict safety protocols, including mandatory masks for both employees and visitors, social distancing, contactless temperature checks, and frequent cleaning.