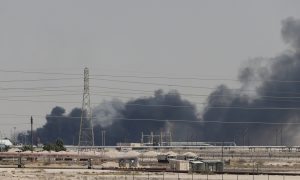 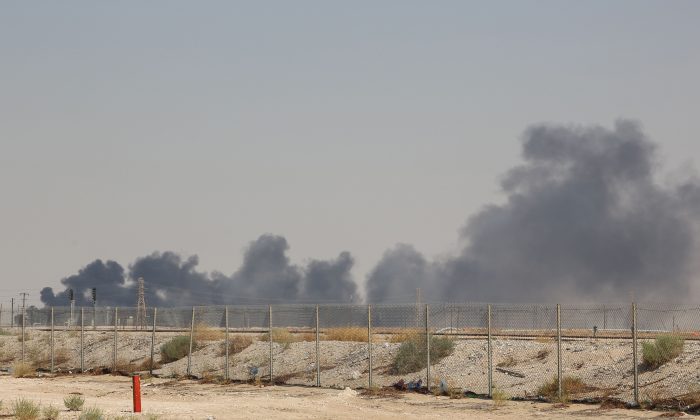 Smoke billows from an Aramco oil facility in Abqaiq about 37 miles southwest of Dhahran in Saudi Arabia's eastern province on September 14, 2019. President Trump on Monday said he considered a lethal counterstrike to be appropriate for the attack, which he said was likely from Iran. (AFP/Getty Images)
Viewpoints

The September 14th attacks on Saudi Arabian oil fields resulted in an outright oil panic. Crude prices immediately spiked as half of Saudi Arabia’s oil production came to a halt, dropping it from about 12 billion barrels per day down to about six. But within a couple of days, ARAMCO, the Saudi oil company that owns the fields, was already repairing the damage.

The early speculation is that Iran was behind the attacks: Reeling from American sanctions, the attack would gain Iran much needed oil revenues enhanced by the rise in oil prices. Tellingly, the price rise was short-lived. What’s more, Iran has denied any and all involvement. In fact, the Houthis in Yemen are claiming full responsibility.

That explanation, however, isn’t universally accepted. U.S. officials such as Secretary of State Mike Pompeo claim the accuracy and travel patterns of the attacks, which apparently also involved cruise missiles, are beyond the scope of the Houthis. American experts also claim the ability of the drones and cruise missiles to evade U.S.-supplied Saudi air defenses and successfully reach their targets points to Iranian involvement as well.

Furthermore, a broken cruise missile which failed to detonate has also been claimed as evidence of Iranian participation. But objectively, producing a battered cruise missile is relatively easy. It is by no means incontrovertible evidence that Iran is the source of the attack.

In actuality, both claims may be accurate. The Houthis are fighting a war against Saudi Arabia and are involved in the Yemeni civil war. And, according to CNN National Security Analyst Peter Bergen, the Houthi rebels have launched more than 200 drone attacks into Saudi Arabia from Yemen prior to the last one. But this last attack was unusually accurate and effective.

What’s more, the Houthis are backed by Iran, although to what degree in money or arms is debatable. Some, such as the Mideast Institute, claim that Iran is involved in Houthi and Yemeni affairs. Other observers report that Iran is not likely to play a key role in determining the direction or outcome of the Yemeni civil war involving the Houthis.

Does It Really Matter?

In denying any involvement in the attack, Iranian leadership pointed out that if it were responsible, they would have completely annihilated the Saudi oil processing plants. That makes some sense. If Iran really seeks to replace Saudi Arabia as the regional leader in oil production, they would eliminate the Saudis’ ability to produce and process crude oil altogether.

On the other hand, Iran has been pushing the United States with merely provocative actions lately. A likely aim of Iranian leadership is to bait President Trump into some level of conflict in order to enflame regional passions and disrupt U.S. sanctions. By hitting Saudi Arabia in a restrained fashion, Iran would be able to test the Trump administration with a level of deniability that would not be plausible with a larger strike.

The Oil Market Has Moved Westward

Whether it was the Houthis alone, or with Iranian guidance, or Iran alone who launched the attack, it really doesn’t matter. The takeaway is that even with Saudi Arabia losing half of its daily output of oil, the market barely noticed. That’s a huge change from only a decade ago.

That’s because the oil market has undergone a radical shift in geography westward. That’s due to a couple recent developments. For one, because of the new fracking technology that extracts oil from shale rock, the United States has surpassed Saudi Arabia as the world largest producer and exporter of fossil fuels. This in and of itself gives the U.S. major leverage in the global oil market and insulation against supply shocks such as the one that has just occurred.

Secondly, Israel’s recent discovery of massive oil and natural gas fields in the Eastern Mediterranean Sea means there ample supplies of oil and natural gas for the world well beyond what the OPEC cartel can offer. In short, the world can no longer be held hostage by Saudi Arabia; or for that matter, by Iran or any other hostile oil producers.

Both of these developments are game-changers in the global politics of the energy market.

A New “Coalition of the Willing?”

Speaking of “game-changers,” the second takeaway has a less clear implication. The United Kingdom, France, and Germany joined the United States in determining that Iran was behind the attack. That’s significant, given that all three nations supported the 2015 Iranian nuclear deal.

The three West European leaders issued a statement that reiterated their support for the Iran nuclear deal and urged Iran to stop violating its terms. The statement also concluded that, “there is no other plausible explanation” and asserted that “Iran bears responsibility for this attack.”

But there’s even more to the European response.

U.K. Prime Minister Boris Johnson has pledged to help the United States improve Saudi defenses, and French leader Emmanuel Macron called the attack a “game-changer.” What, precisely, Macron meant by that categorization, however, remains to be determined. The three European leaders did, however, urge “Iran to commit to …dialogue and to avoid any new provocation and escalation.”

The European reaction demonstrates a growing accord with U.S. policy toward Iran. But are the mullahs of Iran listening?