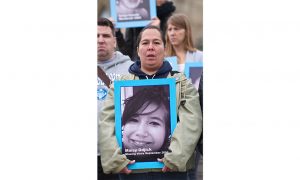 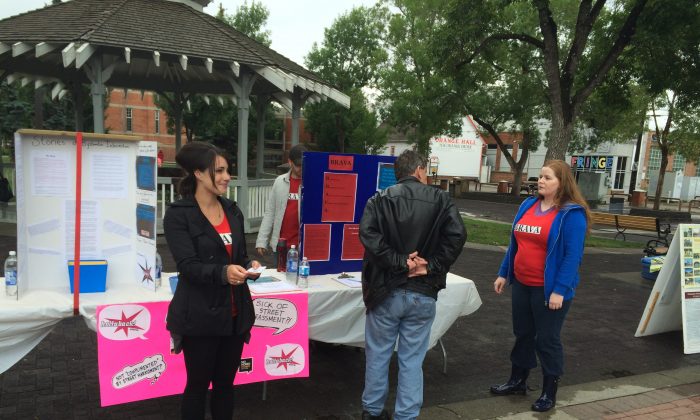 'Be That Person' campaign aims to prevent violence
By Omid Ghoreishi

EDMONTON—Karina Murray was walking home in the early hours of a Sunday morning last August after putting in a late shift at the Edmonton restaurant where she worked when the unexpected happened.

As she approached her apartment building on the normally busy Whyte Avenue—the city’s entertainment district—she was suddenly attacked from behind.

The attacker hit her in the face and tried to choke her. Fortunately, Murray managed to escape and eventually made it to her apartment, surviving the attack without serious injury.

But the attack left its mark on her—mentally and physically.

The social work student had to attend the first day of classes at the University of Alberta with a black eye and a bruised neck, as well as endure comments online blaming her for walking alone or questioning whether she had been drunk.

What weighed more on her mind, however, was why the attack could happen in the first place.

“I got thinking to myself, why is it all about me? Why is this all falling down on my shoulders? I should have been able to keep myself safe,” she says.

Murray decided to take action, and after some research came across the concept of “bystander intervention,” which she discovered is being used widely on university and college campuses across the United States.

But she felt the strategy, which she believes is largely unknown in Canada, would be more useful if extended beyond the university to the broader community.

To that end, Murray has launched a campaign called Be That Person, through which she and other volunteers help educate the public on how to be a responsible bystander when they see someone in harm’s way.

The focus of bystander intervention, as Murray sees it, should be more on prevention rather than at the crisis level, such as breaking up a fight.

“We’re talking about preventing that fight from ever happening, but that means encouraging bystander responsibility—that means as human beings we all have a responsibility to look out for each other.”

“Your sheer presence alone is not only deterring that guy … but it also says to the girl ‘I’m with you, I got your back,'” Murray says.

According to the website of the Office of Sexual Assault Prevention & Response at Harvard University, bystander intervention programs have been found to be “very helpful on college campuses to thwart sexual assault, abusive alcohol consumption, dorm damage, and concerns about suicide, depression, and eating disorders.”

However, research shows that one of the major obstacles to intervention is that people tend to struggle with whether helping someone in trouble is their responsibility, the website notes. This is called “diffusion of responsibility”—meaning that if several people are present, an individual is much less likely help out because he/she believes someone else will.

Murray sees such obstacles as social norms that need to change.

“We’re talking about taking down those social norms and saying, ‘No it’s not rude to get involved,’ and ‘No, it’s not wrong to help a stranger out just because you don’t know them’ … we’re all human beings.”

The fear of embarrassment pales in comparison to the consequences of a violent attack, she says.

Through her website, BeThatPerson.ca, and events organized in the community, Murray advocates that to be a responsible bystander, people should follow the five steps in the acronym BRAVA: Be that person; Recognize the event; Assess the situation as important; Validate the safest option; and Act.

“This is a very broad thing that everyone in the public can do—males, females, young, old, everyone can be a capable bystander,” she says.