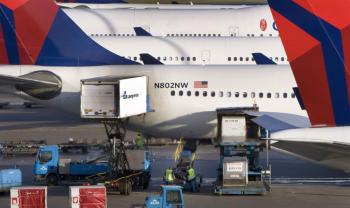 Aircraft from Delta-Northwest are being supplied and loaded before departure at Schiphol Airport, near Amsterdam on December 26, 2009. The United States has asked airlines worldwide to tighten security after a Nigerian tried to blow up a U.S. airliner he boarded in Amsterdam, Dutch authorities said today. (Marcel Antonisse/AFP/Getty Images)
International

Genevieve Belmaker
Genevieve Belmaker is a former reporter and editor with The Epoch Times.
View profile
Follow
biggersmaller
Print
A Northwest Airlines flight bound for Detroit from Amsterdam escaped potential disaster on Christmas day. According to a statement released by Delta Airlines, the parent company of Northwest Airlines, flight 253 was disrupted on approach to Detroit when a passenger caused a “disturbance.” The passenger was subdued and law enforcement officials on the ground were immediately notified and asked to meet the flight upon landing.

Official sources did not name the passenger nor describe the nature of the disturbance. Media reports, citing a White House source who wished to remain anonymous, are calling the incident a failed attempt at a terrorist attack.

The flight, an Airbus 330-300 aircraft with 278 passengers operated by Northwest Airlines, landed safely at 11:53 a.m. local time on Christmas day. The passenger was taken into custody and questioned by law enforcement authorities.

According to the Transportation Security Administration (TSA), upon landing and letting passengers deplane, the aircraft was moved to a remote area to screen the plane and all baggage.

Department of Homeland Security (DHS) Secretary Janet Napolitano was briefed on the incident and is monitoring the situation. A statement from DHS says that additional screening measures might be put into place on domestic and international flights. The details of the possible measures were not described. However, travelers are being encouraged to contact their airlines if flying, or visit the TSA Web site for more information, tsa.gov