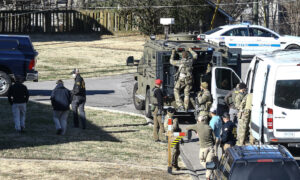 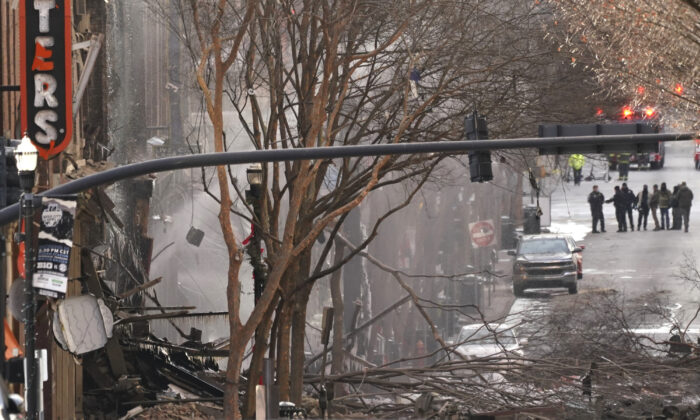 Emergency personnel work at the scene of an explosion in downtown Nashville, Tenn., on Dec. 25, 2020. (Mark Humphrey/AP Photo)
US News

AT&T has been able to restore most of its communication utilities affected by the bombing on Christmas morning in downtown Nashville, Tennessee.

In its latest update, the company said that more than 75 percent of mobility sites affected by the explosion have now been restored, and it is expecting additional improvements as more equipment comes back online. Mobility service in the Birmingham and Huntsville, Alabama, areas are now operating normally.

The explosion that went off outside a building owned by AT&T in downtown Nashville has interrupted internet and phone services in the city and across Middle Tennessee, causing flights to be halted at the Nashville International Airport and outages in multiple counties.

The AT&T building was out of power for several hours after the explosion, forcing the company to drill holes into the outside of the building to reattach power to the affected equipment. The crew on Sunday focused on adding more cabling and generators to secure power.

“We continue to connect generator power to equipment and refuel generators as needed,” the company said. “We expect to activate power to at least four additional floors of the building during the day today and are working on the cooling equipment to manage the temperatures in the facility. Teams are assessing equipment on the building’s lower floors for any damage caused by the flooding of the building.”

The company reported earlier Sunday that they have made “significant progress” in restoration efforts overnight, and that crews were able to pump three feet of water out of the building’s basement. Access to the lower floors of the building, however, are still limited.

According to Nashville Mayor John Cooper, the perpetrator or perpetrators behind the Christmas Day bombing may have been deliberately targeting a nearby AT&T facility.

“Those of us in Nashville realize that on Second Avenue there is a big AT&T facility and the truck was parked adjacent to this large, historic AT&T facility, which happens to be in downtown Nashville,” Cooper said Sunday during an interview with CBS News. “And to all of us locally, it feels like there has to be some connection with the AT&T facility and the site of the bombing.”

“And to all of us locally, it feels like there has to be some connection with the AT&T facility and the site of the bombing,” Cooper continued. “You know, and that’s a bit of just local insight, because it’s got to have something to do with the infrastructure.”

“But you have flooding after these events that gathers in basements,” the mayor added. “And so some of the problems may have been the result of the cure than from the bombing itself.”