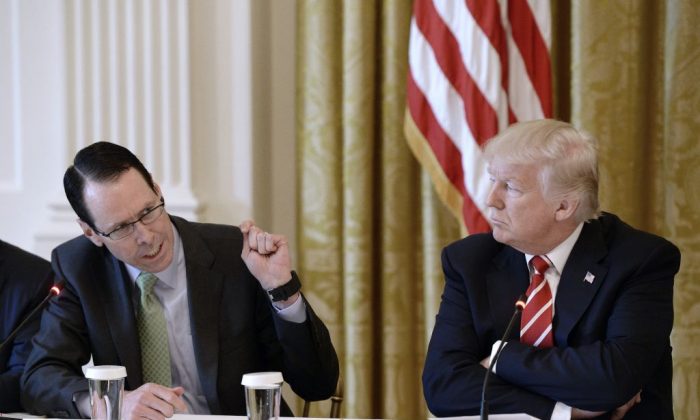 Washington—The CEO of AT&T, Randall Stephenson has refuted claims that he was asked to sell CNN in order to get approval for a merger with Time Warner. A CNN sale may not be required for approval of the proposed mega-deal, but it still faces opposition.

According to media reports, the Justice Department (DOJ) had asked AT&T to sell CNN as a condition to approving the deal, with the news first published in Financial Times on Nov. 8. The report had sparked speculation that President Donald Trump might personally be trying to interfere with AT&T’s acquisition of CNN’s parent company Time Warner.

“First and foremost, irrespective of what you read yesterday, I have never been told that the price of getting the deal done was selling CNN. Period,” Stephenson said at The New York Times’ DealBook Conference on Nov. 9.

“And likewise, I have never offered to sell CNN,” he said.

The Financial Times report said, “AT&T has been told by the U.S. Department of Justice that it needs to sell CNN, Time Warner’s cable news channel, to get its $84.5 billion acquisition of the media company approved, according to three people with direct knowledge of the negotiations.”

Some media outlets described the leaked information as Trump’s revenge against CNN and accused the president of using DOJ to punish political opponents.

“We are at an advanced stage of negotiations with DOJ,” Stephenson said. “We were both a little disturbed yesterday by leaks and information that came out.”

He criticized the media for dispensing “rumors and suppositions.”

The Department of Justice Antitrust Division is currently reviewing the AT&T-Time Warner deal.

AT&T Inc. announced in October last year that it would acquire Time Warner Inc. for $84.5 billion in a stock-and-cash deal, which was the biggest merger announcement of the year.

The transaction would combine one of the nation’s largest content providers with the largest U.S. pay-TV provider.

The merged company would be a competitive alternative to cable TV and other video providers. And customers would be able to access content on all of their devices.

In 2015, AT&T bought DirecTV, the second-largest pay TV provider in the country, with 20 million subscribers. The merger enabled AT&T to bundle product offerings including TV, mobile, and high-speed internet. With the Time Warner deal, AT&T wants to access the media company’s TV and movie content, including its premium assets: HBO, CNN, and TNT.

“Selling CNN does not make sense in the context of what we are trying to accomplish,” Stephenson explained.

After the announcement of the deal, the analyst predicted that the merger would face regulatory scrutiny, similar to what Comcast had experienced in the purchase of NBC-Universal seven years ago. Comcast completed the acquisition in 2013.

Comcast’s acquisition was “probably from a content standpoint a more difficult transaction than this one,” argued Stephenson.

If the deal does not go through, AT&T is ready to go to court against the Justice Department, he said.

On the campaign trail last year, Trump said his administration would not allow the merger because “it is too much concentration of power in the hands of too few.”

Some Democrats voiced concerns about the deal as well. In June this year, a group of Democratic senators including Elizabeth Warren (D-Mass.) called on the Justice Department to block the proposed AT&T-Time Warner merger.

They argued that the combined entity would destroy competition in the media industry and result in higher prices and reduced programming options for American consumers.