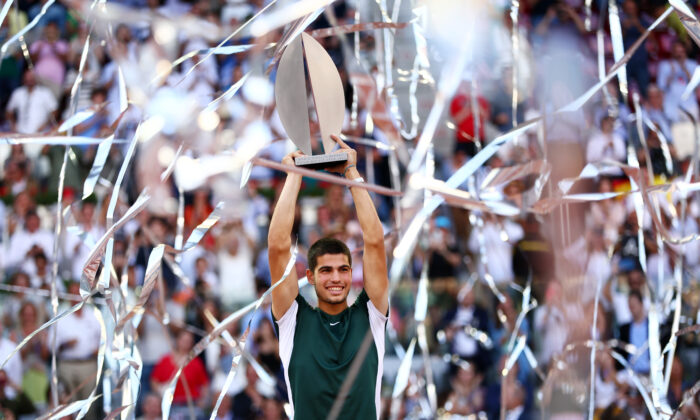 Completing a dream week in his home country, Carlos Alcaraz cruised to a 6–3, 6–1 victory against World No. 3 Alexander Zverev to win the Mutua Madrid Open on Sunday in the Spanish capital.

It is the second ATP Masters 1000 title and ATP Tour-leading fourth title overall this season for the 19-year-old, who improved to 28–3 on the season.

His convincing 62-minute victory against Zverev came on the heels of consecutive victories against countryman Rafael Nadal and World No. 1 Novak Djokovic of Serbia. He was the first player ever to defeat Nadal and Djokovic on clay in the same event.

“It feels great to be able to beat these players,” Alcaraz said in his on-court interview. “To beat two of the best players in history and then Zverev, the World No. 3. He is a great player. I would say this is the best week of my life.

“I am 19 years old, which I think is the key to be able to play long and tough matches in a row. I am feeling great physically.”

Alcaraz now has seven consecutive victories against opponents ranked in the Top 10.

Including his win at Miami in March, he is the second-youngest player to win two Masters 1000 crowns. Nadal was 18 when he won the Rome and Monte Carlo titles in 2005.

Nadal has inspired him.

“Watching Rafa lift this trophy gave me a lot of power to work hard for this moment,” Alcaraz said. “It is a great moment for me. It is the first tournament I watched, so lifting the trophy today is so emotional.”

Alcaraz, the seventh seed, never faced a break point while overpowering Zverev. He broke the second-seeded German’s serve four times, including three straight to finish out the match. Zverev fought off three match points in the final game before double-faulting to end the match.

“I want to congratulate Carlitos. Right now you are the best player in the world,” Zverev said during the trophy ceremony. “It is great for tennis that we have such a new superstar that is going to win so many Grand Slams, that is going to be World No. 1 and I think is going to win this tournament many more times.”

Twelve months ago, Alcaraz was ranked No. 120. On Monday, he will climb to a career-high ranking of No. 6.

Russia’s Aslan Karatsev rallied for a 3–6, 6–3, 7–6 (7) win over South Africa’s Lloyd George Harris, setting up a second-round clash in Rome with World No. 1 Novak Djokovic.

Karatsev trailed 5–2 in the deciding set and had to fight off a match point in the tiebreak to advance in two hours and 37 minutes.