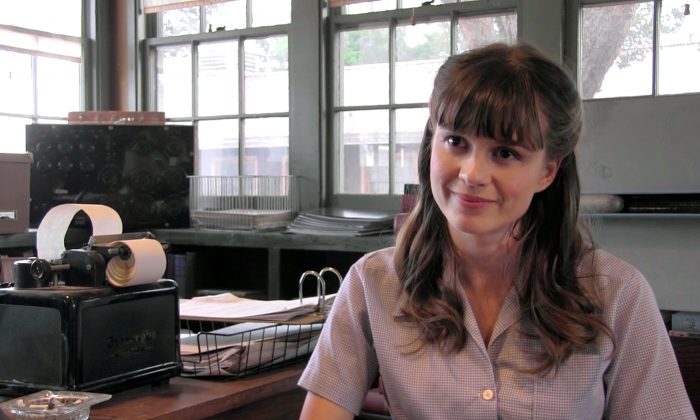 In this July 6, 2015 photo from a video screen grab, Katja Herbers, who plays scientist Helen Prins in the WGN America series "Manhattan," talks about her role in the show's second season on the set in Santa Fe, N.M. (AP Photo/Russell Contreras)
Entertainment

He and co-star Ashley Zukerman read about the Tularosa Basin Downwinders — descendants of a small New Mexico Hispanic village near where the U.S. Army first tested the atomic bomb on July 16, 1945. They studied the aftermath of the bomb’s creation on the scientists.

Next week marks the debut of the second season of WGN America’s drama “Manhattan,” and Hickey said viewers can expect more complicated characters wrestling with moral questions of creating a bomb that could wipe out humanity. He and other actors have met with members of the Tularosa Basin Downwinders, and they have toured real historic sites connected to the bomb.

Hickey, who plays scientist Frank Winter, said it was important for him and the others not to make judgments based in hindsight but to place themselves in the chaotic context of World War II America.

“It’s so easy to talk in history in soundbites,” said Zukerman, who plays scientist Charles Isaac. “To actually put (myself) in that time … I get to learn what it was like for these people. That’s this history lesson.”

The second season of the World War II-era drama series is scheduled to begin Tuesday on WGN America. Series creator Sam Shaw said audiences can expect characters to face the ethical dilemmas that come with testing an unknown bomb with unknown power without being preachy.

However, Shaw said producers wanted to be accurate about the deadly test’s effects and hinted that finale will conclude with the Trinity Test along with the effects of the atomic blasts on nearby residents in the New Mexico desert.

“I want to hang a lantern to the sort of moral ambiguity that exists,” Manhattan executive producer Thomas Schlamme said. “Then, I want to let other people make their minds up.”

This July marked the 70th year anniversary since the Trinity Test in New Mexico took place as part of the Manhattan Project, a top-secret World War II nuclear development program out of the then-secret city of Los Alamos. It came as nearby Tularosa residents now say they were permanently affected by the test and want acknowledgement and compensation from the U.S. government.

The blast sent out a flash of light seen as far as nearly 300 miles away, and Army officials said at the time it was a result of an ammunition explosion. Residents did not learn it was an atomic bomb until the U.S. dropped the weapon on Japan a month later, helping end World War II.

Many of those living near the Trinity site were not told about the dangers and later suffered rare forms of cancer, Tularosa residents say.

She has watched the first season of “Manhattan” and is anticipating the second one. “If the show includes the Downwinders, it will be the first time our story has ever been shared.”

For some scientists who built the bomb, its creation always haunted them — and that’s what the series hopes to capture without lecturing, Schlamme said.

“Their lives are more complicated and more confusing,” Schlamme said. “And many of them step into a darker place than they had ever imagined they’d think their lives would take them.”

Katja Herbers, who plays scientist Helen Prins, said those ethical questions don’t plague her character as much as others in the second season. As one of the few female scientists, her character is trying to maintain her sanity in a largely male world while contributing to the defeat of Nazi Germany.

“Helen doesn’t think about the moral issues yet,” Herbers said. “She wants to win. She wants to be the best.”

Schlamme said he believes the series will resonate with audience because it’s not just a commentary about World War II but our world today.

“This is a show about the birth of the atomic age,” Schlamme said. “And we still don’t know how that age ends.”