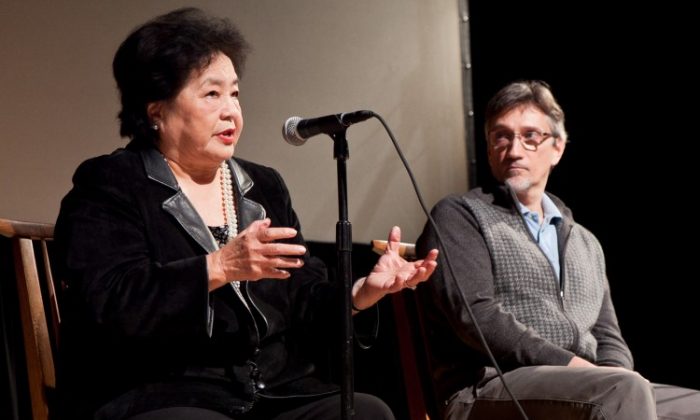 NEW YORK—Instead of reporting to her school in Hiroshima, Japan, as usual on Monday, Aug. 6, 1945, Setsuko Thurlow, then 13-years-old, reported to the army headquarters. She was one of 30 students who had been selected a few weeks prior to decode secret messages from the front lines.

The major delivered a spirited pep talk, telling the students their actions would prove their patriotism and faithfulness to the emperor. The young eighth-graders yelled back, “Yes sir!”

“At that moment we saw the bluish-white flash outside the window,” said Thurlow, now 80 years old.

The impact of the explosion reached her almost immediately. Thurlow said she felt as if she were floating and as the building around her crumbled, she began to fall with it. “That is when I lost consciousness,” she said. “When I regained consciousness in the total darkness and silence, I tried to move my body, but I couldn’t. I knew I was faced with death.”

Thurlow was 1 mile away from the hypocenter of the first atomic bomb dropped in war, a distance that would have been much shorter had she attended school that day. “That is why I am alive today,” she said.

Thurlow shared her story, with an auditorium full of high-school students at the Japan Society on Oct. 17. Yasuaki Yamashita, who survived the Nagasaki atom bomb blast three days later, also gave his account.

The two survivors were joined on stage by Clifton Truman Daniel, grandson of Harry S. Truman, who was president of the United States at the time and ordered the bombs dropped.

Daniel attended, not to apologize for his grandfather’s actions, but to bring the same message as Thurlow and Yasuaki—do not let the younger generation forget, so it will never happen again.

Thurlow, who now resides in Toronto, Canada, said she will never forget her experience; the chilling images of that day are seared into her memory. Unlike the textbook accounts of the day students have read, Thurlow brings history to life, each time vividly recounting her story to students across the world.

After someone helped unpin Thurlow from underneath a piece of timber in the collapsed building she went outside to find the city on fire around her.

“I looked around and saw a procession of ghostly figures,” Thurlow said. “I say ghostly figures because they simply did not look like human beings. Their bodies were burned and blackened and swollen, the skin and flesh hanging from their bones. Hair was standing up toward the sky and some people were carrying their eyeballs in their hands.”

A soldier told her and two of her classmates, who had also escaped the blast by being at army headquarters, to head up the hill with the others. At the foot of the hill, an area she described as the size of two football fields, Thurlow said countless injured people gathered and with faint whispers, begged her for water.

With no bucket she and her two classmates went to a nearby stream and soaked up water with pieces of their clothes, returning to the injured who desperately sucked the moisture from the clothes. For many, it was the last thing they did.

Thurlow said she continued bringing water to people until nightfall.

“When the darkness fell we just sat on the hill and watched the entire city burn all night. We were just stunned without an appropriate emotional reaction to what we were experiencing,” Thurlow said.

Yasuaki Yamashita was only 6 years old when the bomb was dropped on Hiroshima. Three days later, on Aug. 9, 1945, with the Nagaski on heightened alert, Yamashita was playing outside by himself while his mother made lunch.

Yamashita’s mother took him by the arm, and led him into the house. “At that moment came a tremendous flash,” Yamashita said. “You can imagine 1,000 lightening flashes.”

His mother pulled him to the floor and used her body to shield him from the massive amounts of debris. “The noise was terrible,” Yamashita said. “Then all of a sudden, it was totally silent.”

Yamashita, whose house was a mile and a half from the hypocenter of the blast, rose from the floor to find the house had no roof, and the windows and door had been blown away. His mother assessed the wounds and cleaned the glass from their bodies. She decided to move them to a community shelter where Yamashita saw his friends and neighbors who had also survived.

After a few days in the shelter, Yamashita’s family left to find food in the countryside. To get there they had to pass the hypocenter, which burned for days. “It was terrible,” Yamashita said. “I don’t have words that could describe that tremendous scenery.”

Yamashita passed by that spot multiple times in the weeks after the bombing as his family tried to find food to survive and re-establish their lives.

Whether he wanted it or not, the haunting memory was forever imprinted on young Yamashita’s mind. “I wanted to forget my terrible tragedy, so I left Japan. Yamashita said, “I didn’t want to suffer forever.”

Yamashita moved to Mexico in 1968. After repressing his memories for decades a friend coaxed him to share his story with a university class in 1995. After much resistance, he obliged.

It was difficult at the beginning, Yamashita said, “When I finished I started feeling my suffering is fading. For me it was a kind of therapy.”

Sixty-seven years have passed since the bombings of Hiroshima and Nagasaki. School students around the globe, three generations removed, still study the accounts from those days. The textbook excerpts are often lined with facts and figures about death counts and bomb sizes, but for Thurlow, that does not do what she saw justice.

“That is just numbers and statistical figures. It just doesn’t reach your mind, your heart,” she said.

During the lecture on Oct. 17, Thurlow unfurled a yellow banner, made by alumni of her school. It reads the names of all 351 students who perished at her school from the bombing.

“Those four kanji make one person’s name and each one of those names represent one human being who was loved by someone,” Thurlow said. “By one stroke those girls’ lives, many of them in the center of city, became carbonized and vaporized.”

Thurlow said she has repeated this story many times, her heart breaking each time she recalls the horrors she experienced almost seven decades ago. But she knows, especially as she gets older and fewer survivors remain, how important it is for the younger generation to hear her story.

She hopes her story will not only put a face with the numbers students read in their text books, but will change how this generation views the use of nuclear weapons and power.

“It is imperative for us to share what we experience with as many people around the world. This is a warning to you,” Thurlow said choking up with emotion. “I am not begging you for sympathy. I want you to know what we experienced and I want you to join in a vow that we will do everything we can to make sure no other human beings go through this again.”