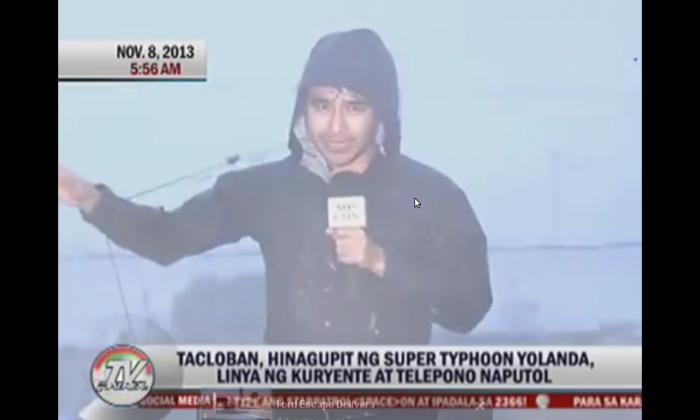 Atom Araullo, an ABS-CBN News reporter, braved Typhoon Yolanda (Hainan) and reported in hard-hit Tacloban City, where massive amounts of damage was done. He was hailed as a hero by many Philippine residents.

Video footage showed Araullo outside during the storm and the fierce winds of the typhoon nearly blew him over.

At one point he was walking down on the street–his pants hiked up to his knees and without shoes–talking about the situation on the ground while rain was pouring.

He reported live at around 6:40 a.m. for the “Umagang Kay Ganda” show, ABS-CBN said.

His coverage of the typhoon went viral around the world, with numerous people commenting on his reporting.

“To them, @atomaraullo is the Guy in the Rain.. To me, he is the Superman in a Supertyphoon!” Josie Sarcone wrote on Twitter.

Another wrote: “I salute you Atom Araullo :)”

Added another: “@atomaraullo Thank you for showing to us what a true Filipino is. You made d world realize that Filipinos are stronger than #YolandaPH.”

ABS reported that its news crew in Tacloban survived the storm.

According to early reports, dozens of people likely died in Tacloban. Citing a government official, Reuters reported that more than 100 people died in the Typhoon and suggested that most of the deaths were around Tacloban.

“Almost all houses were destroyed, many are totally damaged. Only a few houses are left standing, but with partial damages,” Major Rey Balido told Reuters.

“Our disaster officials can’t give a number on casualties yet, the communication lines are down,” Balido said. “But I asked our teams to send us even a crude body count, they are just using a satellite phone and the signal is poor.”