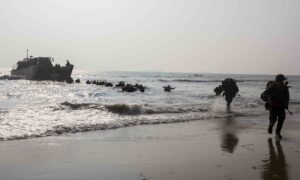 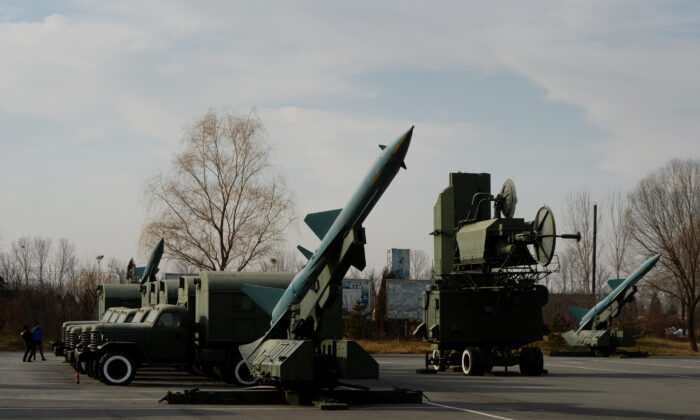 Surface to Air missiles are on display at the People's Liberation Army Aviation Museum in Beijing on December 4, 2013. (Mark Ralston/AFP via Getty Images)
US News

When it comes to defense, Syria, Afghanistan, and “forever wars” dominated the headlines and the political skirmishes in 2019, along with the odd French president.

However, inside the U.S. military machine, the preoccupation wasn’t the dusty valleys of the Middle East, but the islands of the Pacific.

In 2018, the U.S. military received orders for a once-in-a-generation change: revamp for an era of renewed “great power competition” with Russia and China. In 2019, the generals began to flesh out their strategies under growing scrutiny from a Congress—where national security remains a bipartisan stronghold—that is increasingly focused on countering China.

Russia and China have spent the past several decades observing the U.S. military in action, while building up their own weapons and strategy precisely to counter U.S. strengths.

In 15 years, China quietly tripled its annual military spending to an estimated $200 billion, with a clear focus on leveraging the latest technological developments, such as artificial intelligence (AI), cloud computing, and hypersonic missiles, to unbalance the U.S. military.

More fleet-footed than other services, the U.S. Army had already laid out the bare bones of its strategy in 2018, when it created Army Futures Command (AFC), charged with driving what is described by many analysts as the biggest reorganization in 45 years.

The AFC has continued to meld the spirit of the light-footed tech startup with military discipline and strategy, ditching historically risk-averse acquisition culture to get prototypes into the hands of soldiers faster, speeding up the cycle in an era when the latest tech can be outmatched in months, rather than decades.

In October, the AFC published the 2019 Army modernization plan. It builds on the previous year’s plan by laying out the framework for doctrines, training, and concepts that will be needed to speed up the time from conception to use on the battlefield.

China remains the longer-term adversary to U.S. military supremacy overall, with Russia as the immediate technological “pacing threat,” according to the Army Modernization Strategy.

Marines to Get Their Feet Wet Again

Meanwhile, the head of the U.S. Marine Corps laid out plans in July to focus the 186,000-strong force almost exclusively on China, returning to its roots as an expeditionary amphibious fighting force.

In the Pacific, China’s layers of long-range precision missiles designed to hold the U.S. Navy and its jets at arm’s length have left strategists with a headache.

The concerns aren’t simply about all-out warfare, but that this so-called “anti-access bubble” hampers the support of regional allies—and potentially threatens to push the United States out of now-vulnerable permanent positions such as deep-water ports.

That aligns with a new Navy strategy called “distributed operations.”

The queens in the game of maritime chess—the large U.S. ships and carriers—are held at bay by relatively expendable long-range firepower.

Distributed operations means moving away from reliance on a few large ships and, instead, distributing the firepower, forces, and surveillance across many more platforms, including unmanned ships, with no single point of failure.

The Marines’ plan, which has yet to run the gauntlet of Congress, needs the green light in the form of a sweeping Navy force-structure assessment expected in mid-January 2020.

The Navy has been slower to shift strategic direction, encumbered by a lead-footed acquisition cycle and industrial base that churns out massive ships with equally massive price tags.

The Navy’s modernization plan is expected to ask for an increased proportion of smaller ships, and a newly created category of large unmanned surface vehicles and large unmanned underwater vehicles.

F-35, Struggling With Maintenance, Gets a Boost

The shift in Marine and Navy strategy may be assisted by the vertical-take-off F-35 B, which could allow larger amphibious vessels to function as smaller aircraft carriers.

In November, the Pentagon reported that despite being late and over budget, the next-generation F-35 was performing well in tests and with 458 of them already in the field. However, it’s still struggling with maintenance, parts, sustainability costs, and software problems.

The F-35 is regarded by many as the most advanced fighter jet in service—and one of only three “5th generation” fighters in the world.

But the original simple vision of a “jack of all trades” morphed, with the program splitting into what many analysts say is really three different aircraft with very different technical requirements.

But despite these shortcomings, the F-35—which is estimated to cost around $1.5 trillion over its lifetime—was a winner in the 2020 National Defense Authorization Act (NDAA), with Congress agreeing to pay for 12 more than the Air Force had requested.

Those modernization plans, which had been spliced into the 2020 NDAA, emerged relatively unscathed after several months of grinding through Congress.

The Space Force, which had looked threatened by political maneuvers, was given status as a service in its own right, although clutching only about half of its startup funding.

Some members of Congress used the NDAA to pressure the White House over arms treaties, inserting a requirement for reports on the pros and cons of renewing the START treaty, which is set to expire in 2021, and the Open Skies treaty, which critics say is currently skewed in Russia’s favor.

The NDAA also demands the administration justify withdrawing the United States from the INF treaty, which reined in land-launched nuclear missiles to under 500 kilometers (about 311 miles).

The United States fully withdrew from that Reagan-era treaty in August, several years after Russia had begun to violate the agreement, which also applied to conventional missiles.

Russia’s violations were prompted by China building up a vast array of missiles, 95 percent of which have a range banned under the INF.

The U.S. military, which had identified the development of longer-reaching ground-launched conventional missiles and artillery as a priority to countering China and Russia, tested an INF-range missile in December.