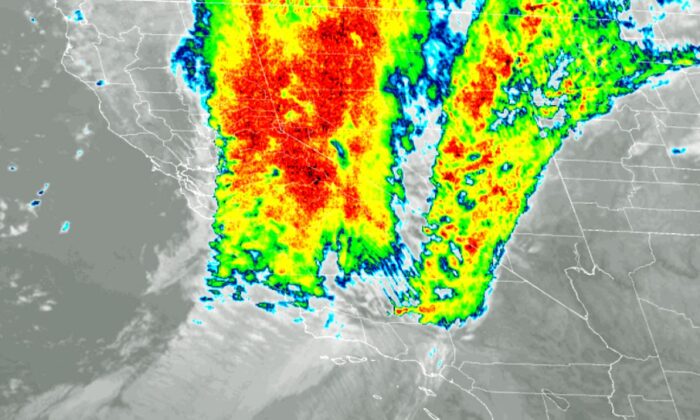 A so-called “atmospheric river” has drenched drought-stricken Northern California with several inches of rain and several feet of snow.

Reports of rockslides, mudslides, and toppled trees were in abundance on Monday as National Weather Service forecasters continued to issue flood warnings and advisories for the central and northern parts of the state.

Flooding was reported across the San Francisco Bay Area and overflowed rivers across Napa and Sonoma counties. The National Weather Service said that about 4 inches of rain fell in San Francisco.

The California Highway Patrol, meanwhile, shut down part of State Route 70 in Butte and Plumas counties about 150 miles north-northwest of the Bay Area due to huge landslides near where the Dixie Fire had raged.

“We have already had several collisions this morning for vehicles hydroplaning, numerous trees falling, and several roadways that are experiencing flooding,” the highway patrol’s office in Oroville wrote in a Twitter statement. “If you can stay home and off the roads today, please do. If you are out on the roads, please use extreme caution.”

A stormy and wet period is ahead for large areas of the country over the next 5 days as multiple atmospheric rivers impact the West Coast, and portions of the central and eastern U.S. prepare for developing areas of low pressure and resulting swaths of heavy rain. pic.twitter.com/Z28uTEE7gE

About 150 miles to the north, the California highway patrol closed a stretch of State Route 70 in Butte and Plumas counties because of multiple landslides within the massive Dixie fire burn scar. Areas that have been recently impacted by wildfires are generally susceptible to mudslides and rockslides because land devoid of trees and plants cannot soak up excess moisture.

“If you are in the vicinity of a recent burn scar and haven’t already, prepare now for likely debris flows,” the Sacramento National Weather Service’s office said on Twitter. “If you are told to evacuate by local officials, or you feel threatened, do not hesitate to do so. If it is too late to evacuate, get to higher ground.”

And as of Sunday, Sacramento received more than 4 inches of rain, which topped its daily record. Some 6 inches of rain fell in Santa Rosa, located north of the Bay Area, according to officials, who issued warnings about flash flooding.

Across all months/days for a 24-hour period, this day will already take 9th all time. There’s definitely a chance to get up to 7th. Tougher to get above that, and number 1 seems very unlikely. pic.twitter.com/A4soFMW3Ba

“A strong winter storm will impact the northern Sierra into tonight,” referring to Monday, the agency wrote. “Snow levels have lowered below pass levels with heavy snow occurring through the passes. The snow level will lower to around 5,000 to 6,000 feet this morning.”

Some areas are slated to receive 1 to 2 feet of snow, with up to 3 feet in isolated spots, according to weather officials.