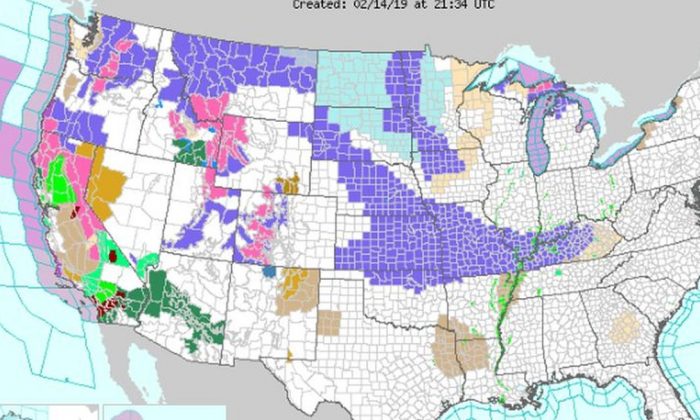 A massive stream of moisture is hitting California, and has been dubbed an “atmospheric river” by meteorologists. It was brining heavy rain and snow on Feb. 14. (NWS
US News

A massive stream of moisture is hitting California and has been dubbed an “atmospheric river” by meteorologists. It was bringing heavy rain and snow on Feb. 14.

An atmospheric river is when a “plume of tropical moisture in the atmosphere that can result in heavy rainfall or snowfall in a narrow swath,” says AccuWeather.

“Use of the term is most common along the West Coast of the United States, but the setup can occur anywhere that persistent winds can transport moisture from the tropics to a mid-latitude location.”

The weather phenomenon has brought mudslides and flooding to California, and it has set all-time rainfall records in some cities.

While #AtmosphericRivers are beneficial and necessary for California’s water supply, too much water too quickly can cause problems. Learn more about Atmospheric Rivers: https://t.co/LPnUo0q2J3 #CAwx pic.twitter.com/ObDCTjlW9V

“Several inches of rainfall is expected across much of southern California, with the highest totals for the coastal mountain ranges,” the agency said on Feb. 14. “There is a high risk of excessive rainfall on Thursday for the southern California mountains, capable of causing flash flooding and mudslides.”

Flash flood warnings were issued across the Golden State, and forecasters have called on locals to stay clear of areas that have recently burned in fires, including the devastating Camp Fire and Woolsey Fire.

An atmospheric river is bringing heavy rain and mountain snow to #California. Check out the conveyor belt of clouds and moisture heading toward the West Coast in this loop from our newly operational #GOES17 (#GOESWest) satellite. Learn more: https://t.co/DhXRshmtyJ pic.twitter.com/fix8G2myrO

The NWS said the risk will last until Friday morning.

“Snow,” the agency said, “ can be expected for this area in the higher elevations where winter weather advisories and winter storm warnings have been issued.”

The rainfall and flood could be an issue for parts of Arizona on Friday, the weather agency said.

ABC News reported that the top rainfall total was recorded in Venado, California, which saw 9.04 inches of rain on Wednesday.

Meanwhile, the northern Central California city of Redding saw 10 to 14 inches of snow, which is the most in 31 years.

Castro Valley: Somerset Ave is closed between Santa Maria & Redwood Rd due to a water main break. One vehicle got stuck in the sinkhole & the driver was able to safely exit w/ the help of firefighters. Firefighters, @ebmud & @CHPcastrovalley remain on scene. pic.twitter.com/2BNx550CEu

The weather is forecast to continue into the weekend in the West Coast to the Rocky Mountains.

Meanwhile, an additional 4 inches of rain could fall along the coast with several feet of snow falling from the Sierra Nevada to the Rockies, ABC noted.

According to AccuWeather, the storm will also bring harsh winds, and some gusts have reached 60 mph in Southern California and 100 mph in the Sierra Nevada mountains.

Strong winds such as these can topple high-profile trees and bring down trees, causing power outages.