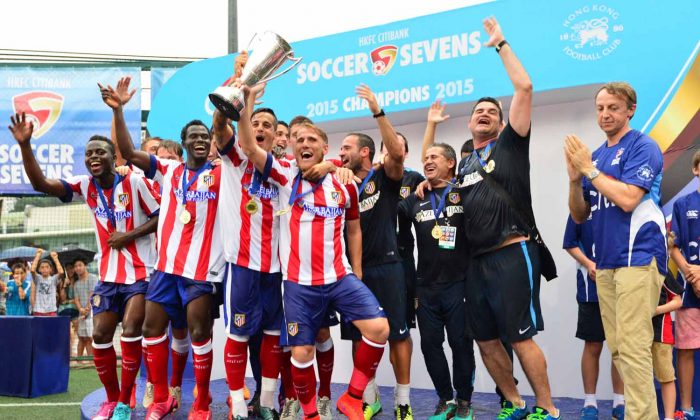 Being new to soccer 7’s, Atletico Madrid started slowly in their group games, twice coming back from one goal to beat both HKFA-U20’s and Yau Yee League Select 2-1, and then drawing 2-all with fellow group seeds Stoke City in their final game. After steadily improving, they required extra time sudden death golden goal victories of quarter final opponents Kitchee 3-2, and semi final opponents Wellington Phoenix 1-nil.

West Ham led the final 1-nil at half time through a goal from Janaai Gordon, who then added a second in the second half. West Ham looked completely in control of the game, but Benjamin Akoto Asamoah pulled one back, and then Ivan Perez equalised with a shot late in the game that gave the West Ham goalkeeper no chance as the ball went into the top left hand corner of the net to force the game into a sudden death extra time golden goal decider.

The 2 squads opted for different decisions on their 4 players to take part in the golden goal decider, with West Ham opting to keep their goalkeeper and 3 outfield players, and Atletico choosing to replace their normal goalkeeper with an outfield player playing between the sticks.

West Ham advanced to the final with a 3-1 semi final win over Newcastle United, who had goalkeeper Adam Bartlett sent off in the 5th minute. Newcastle fought bravely with 6 men and produced a number of chances, but eventually tired to allow West Ham to score on a break.

USRC-BTS won the masters tournament with a 2-1 win over Wallsend Boys Club. USRC-BTS scoring the opener through Daniel Lins Cortes, Wallsend Boys Club equalising through ex Leeds United forward Michael Bridges, and then USRC-BTS winning through a goal from Paulo Henrique. USRC-BTS could have made life easier for themselves after their early penalty award was saved by Wallsend goalkeeper Rudolf Hollaender, and then Hollaender making a series of fine saves to restrict USRC-BTS.

HKFC won the main plate competition with a penalty shoot out win over Leicester City.

KCC Veterans won the Masters Plate with a 3-1 defeat of HKFC Chairman’s Select.