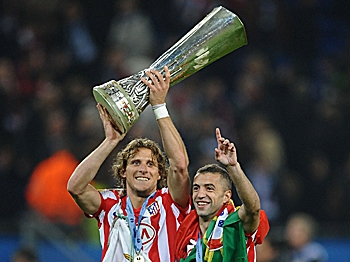 By James Poulter
Print
LONDON—After Fulham’s sublime triumph over Juventus earlier in the competition, overturning the illustrious Italian club after being down 4–1, one sensed that anything could be possible. But in the end it was not to be.

Two fine goals from Atletico Madrid’s super sharp striker Diego Forlan were enough to end Fulham’s fairytale, and the west London club will have to wait that bit longer for their first taste of silverware.

Under the constant drizzle in Hamburg, it was the superior skill of the Atletico attack that ultimately made the difference. Sergio Aguero sparkled on the left wing, and there was more than a hint of his famous father-in-law Maradona’s ball skills in the Argentine’s game.

Atletico stars Forlan and Aguero really set the agenda. A smart save from Mark Schwarzer in the first half kept out Forlan, and an outstanding defensive lunge from Paul Konchesky denied Aguero late in the first half of extra time.

If it were not for that, we may not have had to wait so long for the conclusion. In the 115th minute Forlan’s made his instinctive match winning strike. Tears for Fulham, joy for Atletico Madrid.

Fulham manager Roy Hodgson has fallen at the final hurdle again, losing on penalties at the same stage with Internazionale back in 1997, when the Europa League was called the UEFA Cup.

Fulham’s 63rd game of the season was perhaps a bridge to far, and once their talismanic striker Bobby Zamora left the pitch due to an ongoing injury just before the hour, the Cottagers really ran out of options in attack.

Midfielder Danny Murphy ran himself into the ground. Simon Davies scored a great volley after fine play by Zamora towards the end of the first half, canceling out Forlan’s earlier deft finish, but it was not enough.


Even the heartfelt encouragement from Premier League managers Alex Ferguson, Sam Allardyce, and Harry Redknapp could not galvanize Fulham into victory. But in truth, the journey in itself has been extraordinary.

Speaking with Graham Taylor before the game, Fulham boss Roy Hodgson described the latter stages of the Europa League as being “as tough a competition as the Champions League.”

To reach the final is a great achievement for a club that only two years ago was desperately close to relegation from Premier League. As Hodgson himself said, it is heartening to see that a club can have “enormous success without talking about ‘he’s a £20 million player, he’s a £ 4million a year player.’”

For long periods in the second half it seemed as though the tight discipline and exuberant team spirit instilled by Hodgson in his players may have been enough to subdue Atletico Madrid, but in the end that extra bit of quality in the Spanish side’s attack shone through.

Hodgson is that rare breed, a successful English manager, and carries the quiet dignity of the late Bobby Robson. He was rewarded on Monday with the League Managers’ Association manager of the year award.

But his Fulham side were not good enough to overturn Atletico Madrid, who vanquished many ghosts of their own in raising aloft the Europa League Cup.