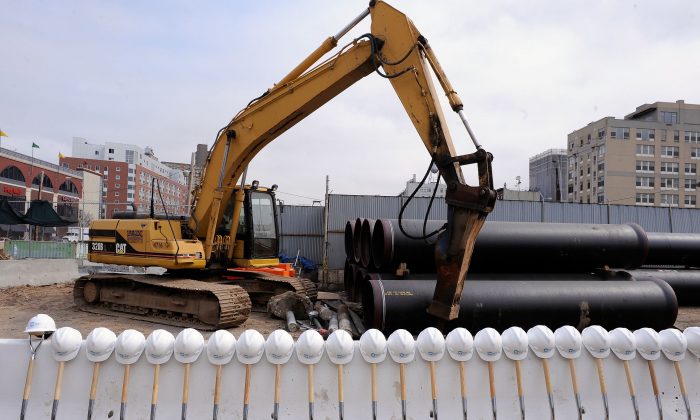 NEW YORK—Atlantic Yards’ value has been cut in half, according to a filing from the developer this week.

Forest City Ratner Cos. plans to take a write-down of between $250 million and $350 million on a 16-tower project on the Atlantic Yard site, according to the Wall Street Journal. It has invested $500 million in the tower project to date. The developer attributed the loss to delays and higher than expected costs.

The $4.9 billion mixed-use development site, which includes the Barclays Center, has been in works for a decade. Elected officials and community members have repeatedly expressed disappointment over the delays in the affordable housing and jobs promised. Construction jobs for the project have been the source of outrage from locals who say they aren’t hiring locally, or from unions either.

The project aims to provide 6,400 units of mixed-income housing. The first tower will be half market-rate and half affordable. The developers have stated the project will create 15,000 temporary construction jobs. B2, the first of 15 residential towers, had delayed construction for six months.

Forest City announced plans to sell a 70 percent stake of the project to state-owned Chinese property developer Greenland Holdings Group in October, which would have given the developer a much needed cash injection. The news was met with backlash from a group of elected officials and the community members.

“The Atlantic Yards project is a public-private partnership made possible by the investment of hundreds of millions of precious taxpayer dollars,” stated U.S. representative Hakeem Jeffries. “Yet, the public has still not experienced the benefit of thousands of affordable housing units that were promised a decade ago.”

Forest City responded stating lawsuits from groups like Brooklyn Speaks, formed to lobby for more affordable housing from the Atlantic Yards development, had actually slowed down the development of those units.

The developers have yet to start stacking modules for the first tower, named B2, which was planned to begin this week. The 32-story tower will be the world’s tallest modular building when completed.