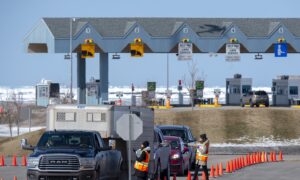 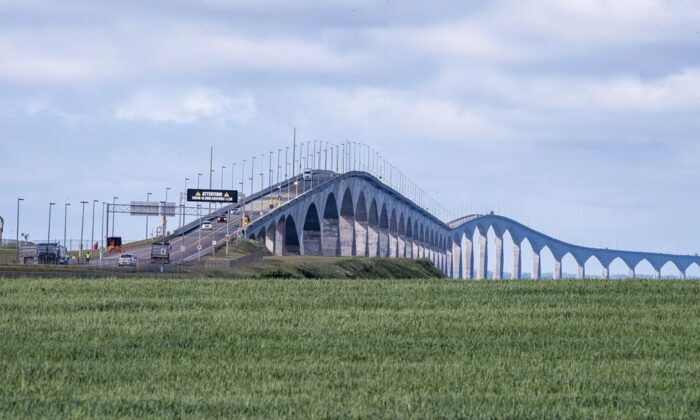 Motorists line up to cross the Confederation Bridge as the so-called tourism bubble for the Atlantic region begins, July 3, 2020. Nearly two weeks after a loosened travel agreement between their provinces came into effect, Atlantic Canadian premiers are not rushing to set a date to welcome visitors from the rest of the country. (Brian McInnis/The Canadian Press)
Canada

ST. JOHN’S, N.L.—Nearly two weeks after a loosened travel agreement between their provinces came into effect, Atlantic Canadian premiers are not rushing to set a date to welcome visitors from the rest of the country.

The Atlantic travel “bubble” that opened July 3 allows residents of Nova Scotia, New Brunswick, Newfoundland and Labrador and Prince Edward Island to travel between the four provinces without being required to self-isolate for 14 days.

Newfoundland and Labrador’s premier had floated the idea of lifting restrictions for other Canadians on July 17, but a statement from Dwight Ball’s office Wednesday said that was a rough estimate of the earliest possible date.

The premier’s office said the travel bubble is being monitored by the chief medical officer of health, and decisions will consider each jurisdiction’s circumstances.

Prince Edward Island Premier Dennis King said Tuesday he is comfortable with the regional bubble as is.

“At this point, I would say like my colleague—the premier of Newfoundland, Premier Ball—that I don’t think we would be actively looking beyond the Atlantic bubble anytime soon,” King said.

New Brunswick Premier Blaine Higgs said in a Wednesday statement that while he is not ready to open the region to the rest of Canada, his government is looking at loosening restrictions for people who live near the Quebec border.

He said it may be possible to allow travel to and from Gaspe and other regions of Quebec, but health risks will have to be assessed before making a decision.

“I have some apprehension right now about opening up the Atlantic region to the rest of the country,” Higgs’ statement said. “I believe my fellow Atlantic premiers share those concerns, and we will be discussing the matter in the coming days.”

The remarks from the premiers came after Prince Edward Island’s top doctor said Monday it is “premature” to encourage broader travel.

P.E.I. has nine active cases of COVID-19, 27 of which are considered recovered. People who have recently tested positive in the province include a health-care worker and a patient in the emergency room at Queen Elizabeth Hospital in Charlottetown.