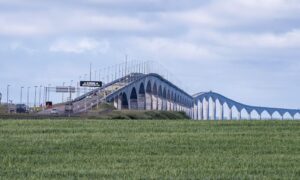 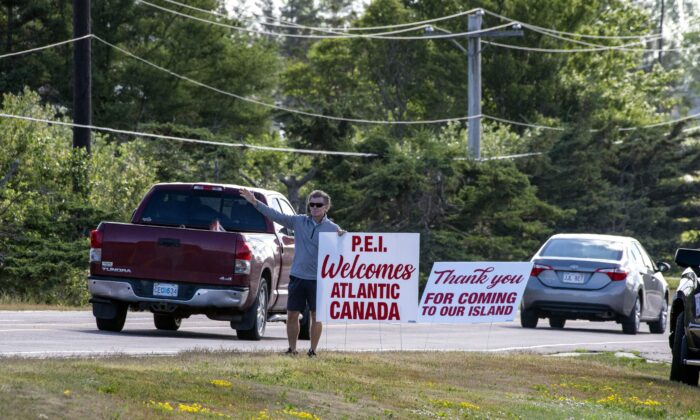 A Charlottetown businessman representing a group of 25 business people welcomes visitors from within the Atlantic bubble to the province near Borden-Carleton, P.E.I., on July 7, 2020. (The Canadian Press/Brian McInnis)
Canada

Although the three Maritime provinces along with Newfoundland and Labrador have been highly successful in keeping down COVID-19 infection rates through their “Atlantic bubble” alliance, nearly 60 percent of businesses would struggle to survive another year if the bubble continues, according to the Canadian Federation of Independent Business.

“I think it’s going to be a tough winter for most businesses,” Jordi Morgan, the federation’s vice-president for the Atlantic region, said in an interview.

“But you also see, and maybe it’s counterintuitively, that people in those provinces are still very supportive of keeping the borders closed until Quebec and Ontario, the rest of Canada, get their act together around infection rates.”

The Atlantic Canada provinces bubbled together starting July 3, permitting residents to travel between their own four provinces without having to self-isolate for 14 days, but maintaining quarantine requirements for visitors from outside the region.

Since the beginning of the pandemic and after nearly four months of Atlantic bubble quarantine edicts—on top of strict rules for shopping, bars, and restaurants similar to those imposed by other jurisdictions across Canada—just 75 people succumbed to COVID-19 in the region compared to 9,973 nationwide by Oct. 26. These included 65 in Nova Scotia, 4 in Newfoundland and Labrador, and 6 in New Brunswick, according to the Public Health Agency of Canada.

In March and April, the four Atlantic provinces had collectively shed 171,000 jobs due to the pandemic shutdowns.

Although 61 percent of those jobs had been recouped by the end of July, there were still 67,500 (6 percent) fewer Atlantic Canadians working in July than in February, according to the Atlantic Provinces Economic Council.

Now three months on and with no intention to ease Atlantic bubble measures or other provincial restrictions on gathering sizes, which affect eateries and restaurants in particular, Morgan says business-owner confidence is suffering.

“In Nova Scotia, businesses that would say they’d survive less than a year with the current revenues is around 34 percent, which is very, very concerning,” he says.

“It’s around 28 percent in New Brunswick and 18 percent in Prince Edward Island, who are faring a little bit better.”

Between 8 percent and 11 percent of businesses in the Maritime provinces “are considering bankruptcy or winding down. These are people that have been really negatively impacted by closures,” Morgan says, noting that those numbers are double in Newfoundland and Labrador.

Don Mills, founder of Halifax-based Corporate Research Associates, now called Narrative Research, has kept a keen eye on data trends in Atlantic Canada for several decades. He says tourism has taken the biggest hit, well before WestJet announced on Oct. 14 that it would suspend service to Moncton, Fredericton, Sydney, and Charlottetown starting Nov. 2, while significantly reducing its service to St. John’s and Halifax.

“There are winners and losers in the economy right now, and the real losers are on the hospitality side—air travel, hotels, restaurants, and bars—which really depend a lot on people coming in from outside the province,” Mills says.

“And so that’s been significantly curtailed. I mean, if you look at airports, for instance, they’re reporting 90 percent lower volumes. That tells you all you need to know [about] what’s going on.”

While approximately 50 percent of tourists who visit one of the four Atlantic provinces annually are from another Atlantic province, Mills suspects fear of the virus factored into lacklustre inter-bubble travelling.

“I’ve done a lot of work in tourism. As an example, 50 percent of the people who visit Nova Scotia come from the other three Atlantic provinces, so normalizing travel from Atlantic Canada was a step towards saving the industry,” he says.

“And you might be able to survive at 50 percent [capacity] if that 50 percent still came. The problem is that people are so paranoid—even within the bubble they were afraid to travel to the next-door province.”

Morgan worries that if local restrictions on indoor restaurant and bar patrons continue as cold temperatures make patios and outdoor spaces unusable, whether the Atlantic bubble will remain in place through another tourism season may not matter to many struggling businesses.

“I know the hospitality sector is really taking a kicking in that hospitality and accommodation—they would like to be able to see more people coming in,” he says.

“But by and large, I think most businesses just feel that [if the government] could ease some of the restrictions to allow more people in spaces as the winter comes on, that would be helpful.”

The way Mills sees it, in any economic crunch “the losers tend to be the people in the lowest-paid jobs, while the public sector has not been touched at all.”

“But most private sector people have had at least some impact on their earnings. A lot of people have gone to reduced salaries, and even the ones that have been able to stay open, if they don’t have the volume, the only way to do it is to do fewer hours and less pay,” he says.

“I think that that’s one of the untold stories, that people in the private sector have really paid the price of the pandemic, and the people on the public side have paid nothing. And we’ve not yet seen the complete consequences [of the restrictions].”