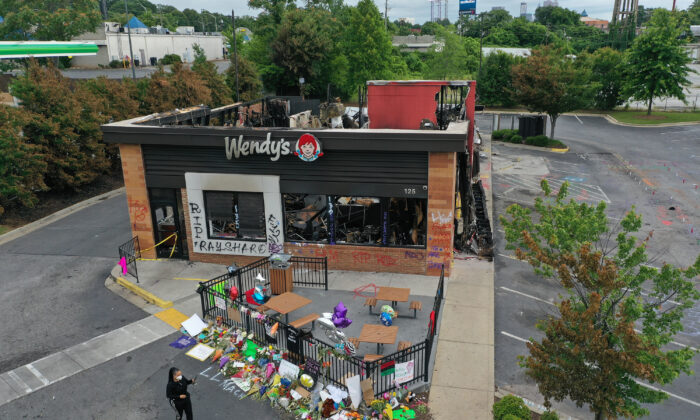 The Wendy's restaurant that was set on fire by rioters after Rayshard Brooks was killed is seen in Atlanta, Ga., on June 17, 2020. (Joe Raedle/Getty Images)
US News

Atlanta Wendy’s Where Rayshard Brooks Was Fatally Shot Gets Demolished

The Atlanta Wendy’s where a man who resisted arrest was fatally shot last month was torn down this week.

Rayshard Brooks was fatally shot in the restaurant’s parking lot while moving away from an Atlanta police officer. Brooks was partially angled toward the officer when he fired a Taser he’d stolen from another officer and he was hit with several bullets in the back.

Garrett Rolfe, the officer who shot Brooks, was later fired and charged with murder. He is out on bail.

A day after the June 13 shooting, a mob burned down the Wendy’s. By the time firefighters could access the scene, the building was consumed.

A makeshift memorial for Brooks appeared in front of the shell. Armed men later took over the area, blocking some from passing through and shooting an 8-year-old girl, killing her.

The owner of the building made the decision to demolish the building and clear the site, Atlanta Mayor Keisha Lance Bottoms, a Democrat, said at a press conference on Thursday.

“We hope that this will be an important step in the healing process for the community,” she said.

Wendy’s has committed to providing services and support to the community, according to Bottoms.

Wendy’s told The Epoch Times that the restaurant debris was cleared out this week.

“This was done in a thoughtful way, with safety as the priority and in cooperation with city officials. There are no additional details to share at this time regarding this site,” the spokesperson said in an email.

The restaurant was seen by many residents as the only place to get healthy food in the area, according to the mayor, who called it a “food desert.”