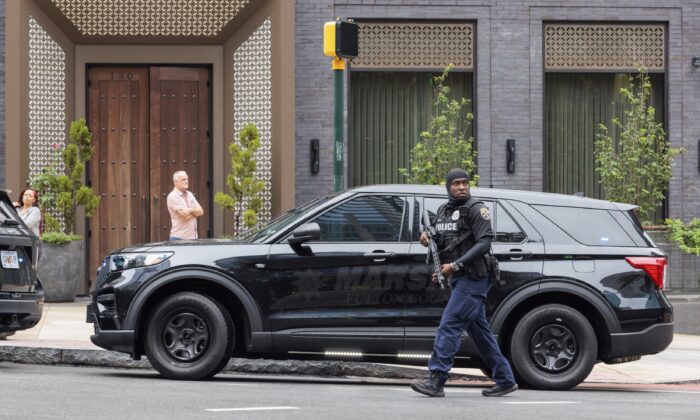 Police block 14th Street between Peachtree and Juniper in Atlanta on Aug. 22, 2022. (Arvin Temkar/Atlanta Journal-Constitution via AP)
Crime and Incidents

ATLANTA—A woman shot and killed two people and wounded a third Monday at two different locations in Atlanta’s Midtown neighborhood and was later taken into custody at the city’s airport, police said.

Atlanta police said they did not immediately know what prompted the attack, but they believe the victims were targeted. The suspect’s name was not released.

“We do not believe these were random acts of violence,” interim police chief Darrin Schierbaum told a news conference.

Officers responded to a report of a shooting around 1:45 p.m. and found two victims at the first building. One of the victims died, and the other was taken to a hospital, Atlanta police said.

While there, police received another report of a shooting at a second building less than a mile away. That victim was also taken to the hospital and later died. Atlanta police said they are investigating how the two sites are connected.

Law enforcement officers from multiple agencies descended on the Midtown area, telling residents to stay inside as they searched the area. Atlanta police said an “extensive camera network” helped them track the suspect and she was eventually located at the Hartsfield Jackson Atlanta International Airport.

Mayor Andre Dickens said the woman was arrested before entering a restricted area and that the “security of the airport was never compromised.”